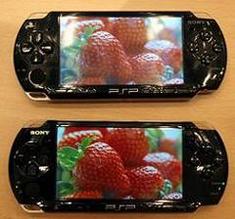 We know there’s a new PSP/PSP-2/PSP-3000/PSP-4000 heading our way in the year 09 (and that current models are available in an array of carnival colours in Japan) , but details so far have been somewhat eye brow raising and need to be approached with a certain degree of dubiousness. This time however, rather than getting the low-down from what is usually an anonymous tip off, it’s a “credible source” parting with the PSP info.

The latest rumours churning in that worn out rumour mill claims the new PSP will be finger friendly with a the inclusion of a widescreen multi-touch interface and Bluetooth connectivity. But if Sony wants to hold on to loyal fans, it’d do well to keep the traditional PSP buttons as opposed to making the whole device accessible by touch. It’s uncertain what it’s going to come out with at this point.

So what we’ve heard so far is a brighter and larger power guzzling LCD display and therefore slightly shorter battery life is a PSP possibility – as is an extended battery for up to ten hours of gaming action. And the likelihood of it launching in October is again, probable. But no confirmation from Sony means, we have to take it all with a pinch of salt.

Sony is still in denial and refuses to verify anything, but surely they’re going to break soon – the rumours have hit overdrive now and we’re dying to know. We just want the truth, the whole truth and nothing but the truth.