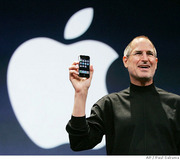 Bad news for fans of Steve Jobs and the word ‘Boom!’ – it’s been announced he’s not going to present the keynote speech at January’s Macworld. Adding fuel to the fire regarding the state of his health, he’s handing over the reins to Phillip Schiller, the vice president of marketing.

Apple have also announced that they’re not going to be attending Macworld after 2009. The event is actually run by IDG Publishing, who publish Macworld magazine, not Apple itself. Apparently, they reckon trade shows are less relevant to consumers and they’ve got better ways of getting their products to people, such as creating destination shops. And they’re probably right, much to the annoyance of tech journalists worldwide, who tend to quite enjoy January trips to California…