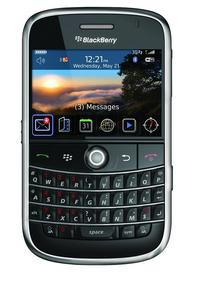 There are lots of people out there holding out for the Blackberry Bold, and T-Mobile have some news for them. They’re the first to announce they’ll be carrying it, with stock arriving in September (chances are it’ll be carried on most networks though).

It’s a good looking phone, with WiFi, HSDPA and GPS. The trackball has also been given extra functionality, so you can now use it to do things like zoom in and out of web pages. Web browsing overall is supposed to be massively improved compared to previous Blackberry devices, giving you the choice to browse in the mobile setting or as a normal web page.

It’s also the first HSDPA Blackberry to be quadband, which is no small thing for those who jetset around the world.

It comes with 1GB of internal memory, although this can expanded using the MicroSD slot. The camera is rather measly 2 megapixels, but I suppose the good news is that this means you’ll be able to fit lots of pictures on the phone (silver lining hunting).