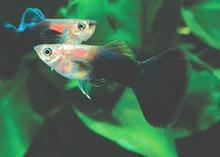 It seems when male guppies get in the mood for love they can be frighteningly persistent, and if they’re rejected will apparently “attempt to sneak a mating”. Something tells me that the sneak mating move isn’t a defence that would stand up in court. Rather than risk attracting males, female guppies will instead choose to swim in an area swarming with predators, in the hope that that will deter the amorous males.

In my head, this is the equivalent of running through traffic to escape from a Weatherspoon’s pub on a Friday night. I think we can all sympathise with the female guppies, ladies.