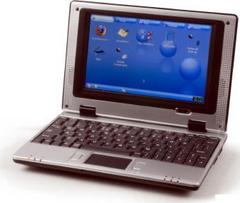 If you thought you’d made your low cost, low spec laptop decision, prepare to throw your hands up in despair. Purveyors of electronics and givers out of umbrellas when it’s raining (it happened to me), Maplin, has entered he marketplace, offering a Linux based model.

This one totes just a 7-inch screen, but has an SD card reader, three USB ports, a 2GB SSD and a microphone, but no webcam, by the looks of it. There’s also just 128MB of memory, making this something you won’t do much more than surf the web on.

For August, you’ll be able to buy it for £169.99, although it goes up by £50 after that (or so they tell us – potentially there could be some ‘Special Offer Extended!!!! type shenanigans when it reaches September).