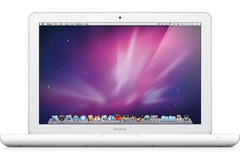 Apple released a new raft of shiny new Macs yesterday. There are three products: a MacBook, a Mac Mini and an iMac range complete with a 27inch screen version and the visionary new Apple mouse. Basically all specs on all models have been ramped up. But a few changes stood out:

Macbook
The 13 inch Macbook – Apple’s best selling computer – has now got a lot of features previously only on the Macbook Pro, putting them in the average consumer’s price range.

1. New Macbook is now “unibody”, with the case made of a single piece of plastic – making it more durable, and more smooth

3. The touchpad is better with an improved “glass multi-touch” technology previously only in the Pro.

4. The battery is bigger than the old model and so lasts for longer – up to seven hours we’re told- with the downside being that it’s not replaceable. “Instead of the space you need for replaceability, we put extra battery in.”

Mac Mini
Have bumped up the specificiations, and – responding to people using the Mac Mini as a kind of server – have released a 1Terabyte version.

IMac
At 27″ this is huuge. Other improvements to the screen include better resolution, a pixel density of well beyond HD. Can be specced up and has space for SD cards. Comes with a Bluetooth keyboard and the new Apple mouse (of which more later).
Also energy efficient – to the extent where it powers down in between key-strokes.