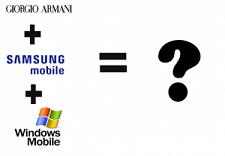 The Samsung/Armani team are back once again, to unite and bring us what is hopefully going to be a very covetable and highly fashionable, spec-heavy handset. The last partnership between the mobile brand and fashion label resulted in something a little unfashionable and rather bog-standard, so hopefully they will revert back to a time when a collaboration between the pair equated to luxury goods.

The rumours say it’ll be a Windows 6.5 powered handset, the facts say nothing, as there aren’t any. Both of the previous Samsung/Armani handsets have been relatively different, with the P520 sporting more of a high-end designer look and the M7500 handset taking the candybar path, complete with night effect. So, it’s not really clear what kind of handset the third instalment will bring – so expect much speculation on the web.

So far this year, we’ve seen full touchscreen devices -both high and low end – kiddy-esque mobiles and music heavy handsets. Could this latest designer collaboration take on one of the above? For now, we’ll just have to make do with waiting and internet gossip.