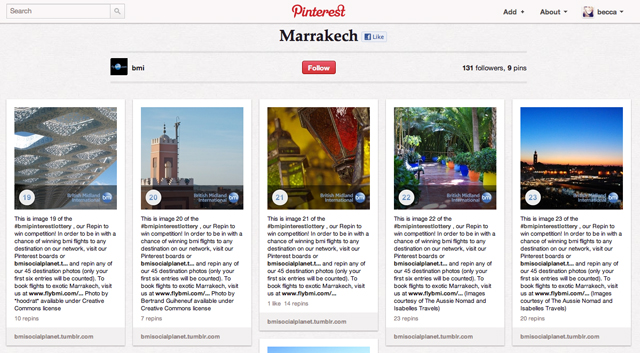 Gone are the days of Pinterest being a secret hidden gem, now even Mark Zuckerberg (allegedly) and Whole Foods both have an account. But how are dedicated users feeling now that brands are starting to get in on the action?

Although the mechanic is set in stone, see an image or a video and ‘pin it’ to a board, there’s a lot of freedom when it comes to how, when and why individuals use Pinterest. Therefore it’s no surprise that some see it as a personal space for lovely images and feel irritated by the thought of businesses being on the site too, and others are actively getting involved with their favourite brands already. Of course the same can be said for most social networks, but from what I can tell many users feel extremely possessive of the things they’ve pinned and the boards they’ve ‘created’ on Pinterest so far that it might be harder for brands to interact in a way that seems natural.

There are those brands that have already taken to Pinterest well, that use the site as a way to promote a lifestyle like Etsy, pin images of the products they sell without it seeming too much like a shop front, like Burberry, or share relevant tips and ideas, like Whole Foods.

However, the big problem for me personally is how brands will run competitions that make me want to enter and don’t just irritate the hell out of me.

So far we’ve seen a number of different brands adopt a ‘pin it to win it’ kind of strategy with some success, like Lands’ End Canvas in the US. Today we were sent details of a new competition being run on the site by bmi, which has launched a ‘Pinterest lottery’ and adopts a similar kind of mechanic. The idea of the promotion is that users are encouraged to share photos to their boards and then a number of winning images will be announced at the end of each week. To some the idea may sound a little forced, but luckily bmi has chosen lovely photos of great destinations to include in the lottery and the brand is open to suggestions about the boards that will be added in coming weeks, so it seems a little less fake and much more about sharing great content, as well as encouraging people to enter a prize draw too, of course.

It seems Pinterest could well be an ideal place to hold competitions, as long as sharing good quality content is still at the core. But, that doesn’t mean to say brands can crowbar promotional messages at the end of cute kitten photos because they know we’ll share them…

So are you happy to ‘pin it to win it’ or is the site much more about personal photos to you?

Also, if you see a great Pinterest promotion we’d be really interested in hearing about it and why you think it’s awesome/totally sucks.