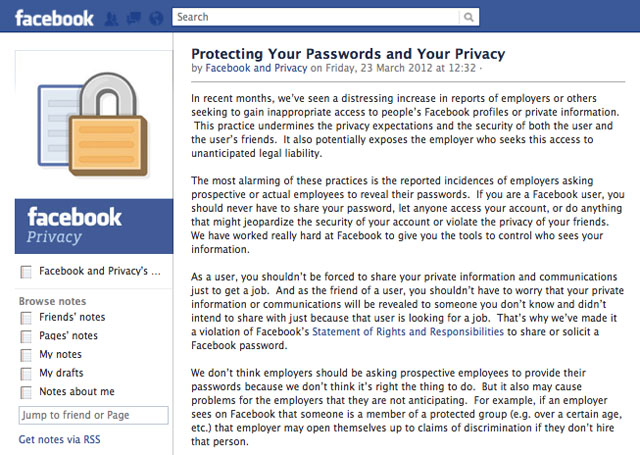 The on-the-ball Facebook team has released a statement in response to claims that sneaky employers are asking potential employees for log-in details, which states the social network takes the matter very seriously and could turn to legal action in the future.

It really comes as no surprise whatsoever that Facebook is a bit angry about the fact it’s been revealed some employers, educational institutions and government agences are asking potential employees for their log-in details so they can see what they’ve been up to.

A statement released today by Erin Egan, the social network’s chief privacy officer, explains some of the incidents that have occurred and goes on to say:

“Facebook takes your privacy seriously. We’ll take action to protect the privacy and security of our users, whether by engaging policymakers or, where appropriate, by initiating legal action, including by shutting down applications that abuse their privileges.

“While we will continue to do our part, it is important that everyone on Facebook understands they have a right to keep their password to themselves, and we will do our best to protect that right.”

We’re not at all surprised that Facebook isn’t too happy with these claims. After all, in many ways these kinds of actions undermine what Facebook is all about, violate its terms of service and oh yeah, it’s just REALLY FREAKING CREEPY.

One thought on “NO SURPRISE: Facebook not happy about employers asking for our passwords”