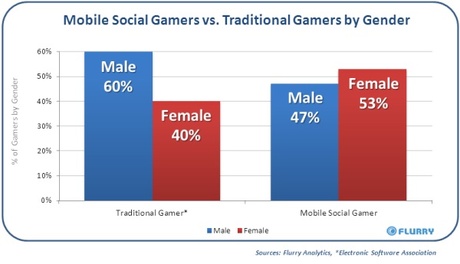 In the booming arena of mobile phone gaming, girls outnumber boys. Only just – by 53% to 47% – but the edge is significant because the figures are the other way round in traditonal gaming on consoles like the Xbox or PS3.

And Asians are disportionately represented among mobile gamers compared to other ethnicities.

In fact, Flurry go so far as to say that the age of the hardcore 18-34 year old game is over:
“The video game industry is transitioning from an era of hardcore male gamers who have dominated the landscape, to more mass-market usage across mobile social games. 18 – 34 year old males are being supplanted as the most attractive segment to target by big brands and agencies. The Mobile Social Gamer segment is highly engaged, younger, made up of more females, more educated and more affluent. In terms of usage behavior, they use social games far more often than they watch prime-time television shows, and using for 25 minutes per day, are heavy users of this interactive content. Mobile social gamers are the new mass-market powerhouse.”

Here are the graphs… 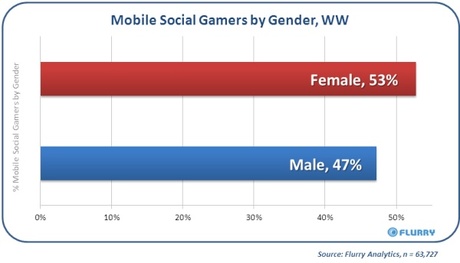