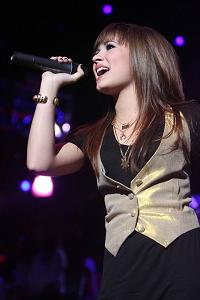 Up until an hour ago, I’d never heard of Demi Lovato (“Demi who?”). As always, a quick trip to trusty source Wikipedia cleared all that up. I can now tell you she’s an American actress, singer and songwriter who has starred in Disney movie Camp Rock alongside the Jonas Brothers. She’s also due to star in her own TV show ‘Welcome to Mollywood’ next month and she’s currently on the Burning Up Tour with the Jonas Brothers.

Ok, enough about her. Let’s talk about the gadgetry. The tour is sponsored by Sennheiser, so that means no other brand of equipment will be seen for miles. Demi manages to get over the hurdle that is the deafening/overpowering audience noise using a wireless SKM 945 G2 microphone teamed up with a very powerful PA and EM 550 G2 receiver.

Other equipment in use to ensure a smooth running show includes e945 wired mics, evolution wireless ew 300 IEM G2 monitor systems, eight belt-pack receivers, including six stereo mixes, an ASA 3000 active antenna combiner and an A 5000 CP circularly polarised antenna. Now, a lot of that equipment went straight over my head, but I’m not going to feel bad – I’m not a sound/stage technician. What I can tell you though, is this profusion of equipment is working extremely well for the sound crew “and there’s no cross-bleed, so it’s all good”.

This isn’t the only tour taking advantage of the quality of Sennhesier equipment. George Michael also has faith in their stage equipment and has been using it throughout his “25 Live” tour.