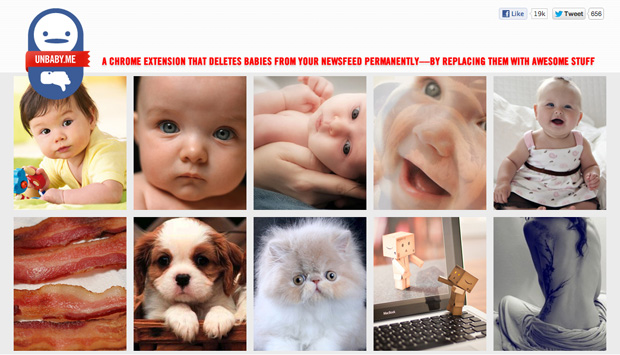 No matter how many times you cull annoying people from Facebook at some point at least one or two of your friends, relatives or co-workers are bound to procreate. And what does that mean ladies and gentlemen? Well it means 3674876746 updates about little Sally or Stewie and 34598748768576 photos of them too. Sure they’re cute, but we don’t need to see hourly evidence of them being that way.

If you can’t bring yourself to unfriend people just because they’ve had a kid or you don’t want to constantly be hiding and unhiding their updates in case they say the odd interesting thing, then unbaby.me might be for you.

Unbaby.me is a Chrome extension that doesn’t just hide baby photos from your Facebook news feed, but it replaces them with images of awesome things, like cats and bacon. If you’re not a fan of cats and bacon then you can customise the extension to pull any image-based RSS feed from anywhere else too.

According to comments under Mashable’s original article the extension works by analysing the words in the captions underneath the photos, so don’t be surprised if one or two of the little scamps slip through the net.