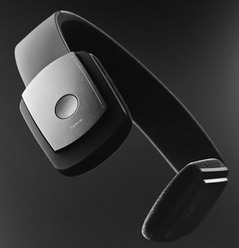 “Well hellooooh,” were the first words out of my mouth when I unboxed the Halo. These are some thoroughly understated, very sexy, headphones. They look incredibly simple with one wide matte plastic headband with two barely perceptible hinges for folding the phones up.

Under the headband is a soft fabric material similar in texture and appearance to the kind used on LP dusters — if you’re old enough to remember what one of those looks like, ask a middle-aged relative.

The phones themselves are very flat with the only analogue multi-function button on the back of the right phone, alongside the touch-sensitive volume slider.

Turning the Jabra Halo on is an interesting operation. While the headphones are folded underneath you can’t turn them on. To do so you have to fold them out and fix the hinges into place — this is a natty little idea and will save you some serious battery life.

Once on they do make me look, erm, I dunno, a bit weird(er than normal). See what I mean? This tends to be less of problem for people with more hair, or you know, if you’re less vain.

Some people have complained that the Halo’s phones don’t sit properly on the head and that they can feel insecure. I can’t say I found this problem, though this might be because I have uncommonly large, sticky-out, ears and quite a bulbous head.

The quality of the plastic is very good — it’s a faintly textured matte and feels strong. The fabric inner feels very comfortable on your bonce.

The extension mechanism is entirely hidden in the body of the phones and clicks pleasingly as you find the right size for your head.

The quality of the optional 3.5mm is pretty good too, especially for something that you’re probably not going to be using that often. It shows a commitment to quality that makes you feel your investment has been well-placed.

The only slight worry I have is the folding hinges. Initially these feel a little resistive and brittle, but once you’ve folded and unfolded them a few times they loosen up a tad, and though I’m sure they won’t break, they aren’t reassuringly sturdy.

The performance of the Halo is pretty solid all round. Most notable though is the mid-performance — it is joy-inducingly precise and defined, meaning that acoustic, folk and plunging pianos sound awesome.

The treble is crisp and firm though can waver at the highest volumes while the bass is fine, just fine, certainly not anything to write home about, but equally not something that should perturb your potential purchase unless you’re one of those bass fiends who likes the low-end to dominate any song, in which case you’re a silly person.

Sadly call quality isn’t the same as the audio quality. While your caller’s voice will come through clear as day, the dual microphones struggle to single out your voice in busy environments. That said if you’re in a moderately loud or a quiet place they seem to be able to find your lovely voice a-okay.

Overall: 14.5/20 — If you’re looking for an afforable for a pair of wireless bluetooth headphones — you aren’t exactly spoilt for choice. Jabra have gone the a long way to make the Halo the best option on the market. Versatile, loaded with functionality and not a bad listen to boot. You could certainly do a lot worse, though I recommend trying a pair first, because they don’t fit all head-shapes perfectly.

Day 1: The Trooper by Nixon