Twitter is now vital to modern communications. Everyone who is anyone is on it – from the President of the United States right down to you and I… but that doesn’t mean that it is always hassle free, and always a delight to use. So here’s our top six most annoying things on Twitter.

You have to feel sorry for famous people. Sure, they’ve got their massive houses, financial security and fulfilling careers, but interacting with fans can often be a frustrating experience for both the celebs themselves and their fans.

One of the most irritating manifestations of celebrity/fan interaction that has emerged is begging for a retweet. In lieu of being able to ask for an autograph, or being able to hassle the person off the telly whilst they’re out shopping, getting a retweet is seen as the new baseline in having someone who used to be on Children’s TV validate your existence.

Don’t get me wrong – it’s always quite exciting when someone famous replies to a tweet I’ve sent them… but I don’t impose that on their other followers. By asking for a retweet, their fan request clogs up the timelines of thousands of other people, and adds no value to what they are seeing.

Worse still is when there’s not just a narcissistic request for attention, but a charity angle attached. It’s annoying because there’s no one being consciously awful – but it creates an awkward encounter for everyone involved, from fan, to celebrity, to the people looking on. 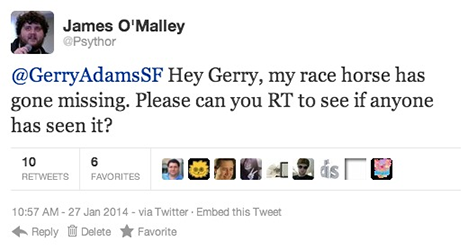 You must have seen it: a plaintive plea for support because someone is raising money for a relative or has lost a pet. The trouble for the celebrity too is that if they retweet one… chances are there will be many more similar requests in quick succession. Retweeting them all would render them meaningless, as no one can supporting everything… and this means that the poor old comedian from the panel show you like has to choose between whether victims of one disease or another are more worthy.

2) Someone mentioning in the person you’re subtweeting

Ever had a conversation about someone on Twitter, only to get rudely interrupted by them? I once tweeted about BBC One’s Sunday morning religious programme, The Big Questions, and then had the presenter Nicky Campbell, who had clearly been searching for mentions of the programme, tweet and tell me off. Which was embarrassing.

Worse still is when you’re tweeting a criticism of someone who isn’t quite famous enough to ignore it/be above it all, like a newspaper columnist, deliberately not using their Twitter handle to attract their attention… only for one of your followers to respond, mentioning the person you’re slagging off by their handle. Imagine gossiping about someone in the pub… only for your friend to then phone them up and tell them what you just said. That’s what these people are doing.

Twitter can sometimes feel rather competitive. Because everyone is on there during the day, reacting in realtime to news events, it often becomes like a competition to see who can come up with the best newsy quip on the latest story. For the winner, their victory is immortalised by thousands of retweets, as their words get picked up and spread like a virus… for the loser, they’ve just wasted an afternoon trying to think of puns about someone spilling concrete on the Victoria Line.

What’s particularly annoying is when you come up with a brilliant joke, but make the mistake of tweeting it at the wrong time. If you’re on Twitter a lot, chances are you’ll be somewhat ahead of the curve and will end up making jokes about events that most people are unaware of… ruining the joke’s impact. Have a brilliant quip about the latest celebrity death? Better keep it to yourself until people have seen the @BBCBreaking tweet, or it won’t go anywhere. This also occasionally happens the other way around – when you’ve missed a story, so have to try to figure out what has happened by all of the jokes being tweeted about it.

It’s probably just a numbers game, but when you tweet a joke to enough people… there’s always going to be one or two who take it seriously. A few days ago I tweeted “I don’t know about you, but before the ‘gays cause floods’ thing, I definitely thought UKIP were a professional political party” – which surely is obvious in it’s sarcasm… yet I still got tweets back from people reminding me of the political party’s other slip-ups. And just minutes ago, this happened:

Agree with all the Tories saying £150k isn’t by any means rich. Good argument for a £85p/h living wage.

Roughly 10% of the population will get there at some point. But what will you cut to pay for this class war insanity? @NyeBeverage @Psythor

5) When real people interact with brands

It’s now standard for most companies to have a corporate Twitter account – to provide marginally less unbearable customer service than having to phone them up. Unfortunately this has led to two annoying things.

First and foremost is when we get angry, we’re all tempted to tweet a public tweet, attacking the company with their twitter name included, so they definitely will see it. The implicit idea is that if you have a decent following, the company will see it and sort out your problem quicker, to stop the negative PR. Unfortunately for everyone else on Twitter, it means we have to see a tedious stream of “Why won’t @BTcare sort out my problem?” “I’ve tried calling @BTcare, why don’t you fix my broadband?”. Astonishingly, we seem to have discovered something that people care about even less than the weddings and children of other people.

What’s more terrifying is something I’m afraid is going to happen soon: Brands talking to each other on Twitter. And all because this exchange between Tesco Mobile, Yorkshire Tea and Jaffa Cakes went viral. 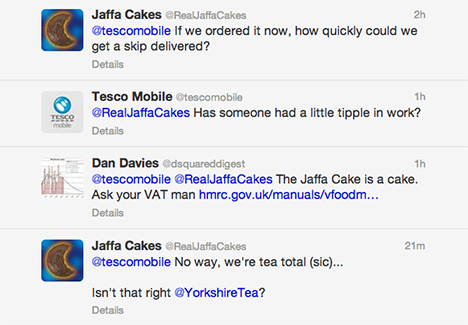 Maybe I’m just not into whimsical tweets, but there’s something unpleasant seeing real human beings who I know and like retweeting stuff like this – as surely we all know that ultimately it’s just a potent combination of advertising and bored community managers? At least banner adverts are honest.

Okay – so maybe I’ve not sold you on why this is annoying… but I’m sure you’ll agree once it starts happening again… and again. I can guarantee that “talking to other brands” is the hip new thing in various social media strategy meetings in many different companies – as they hope to ride the coat tails of this viral success.

6) Those obviously made up letters that everyone retweets

Okay, so maybe this last one is a little petty. 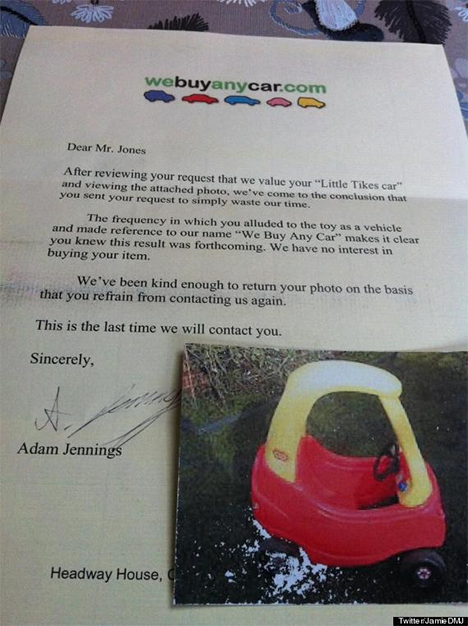 They’re so obviously fake… why do people keep retweeting them?! I can’t stand them, and excellently, I’m not the only one. Bic, the company who make pens, weren’t very happy about these fakes either – and put out an angry statement… so hopefully that’ll stop the creator making any more.

There’s quite a lot of things that annoy me on Twitter – why not tell us what annoys you in the comments?

One thought on “The 6 most annoying things on Twitter”