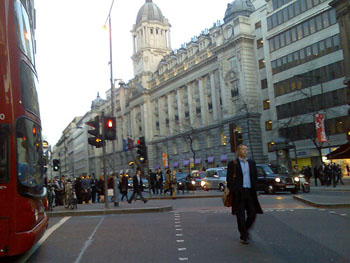 When we’re out and about many of us who have no problem with our hearing take for granted just how many sounds we hear throughout the day (even when we’re on our own) and what a big affect they have on our experience of the world around us and our own personal safety.

Researchers at the Korea Advanced Institute of Science and Technology (KAIST) in Daejeon have been working on a way to give deaf people a better indication of the sounds around them by creating a pair of special glasses, which allow the wearer to “see” when a loud sounds has been made and where it may have originated from. The wearer has the ability to control the threshold of sound, so it can be as quiet as a car slowly driving past.

The glasses have microphones attached around the frame, which can detect loud sounds over a certain level. Once a sound is detected LEDs will flash inside the frame in order to alert the wearer.

At the moment the glasses need the wearer to be lugging around a backpack at the same time in order to process the signal, which is hardly ideal and New Scientist also points out that the time may face patent issues from Google and its Project Glass Initiative, which flashes when it detects visual alerts too.

The KAIST team are clearly up against a lot of obstacles, but if they can create a more wearable device and not annoy the Google team too much the glasses could be useful for those living in crowded cities with hearing problems or they could just be another piece of cumbersome and unnecessary tech, let us know what you think in the comments below.