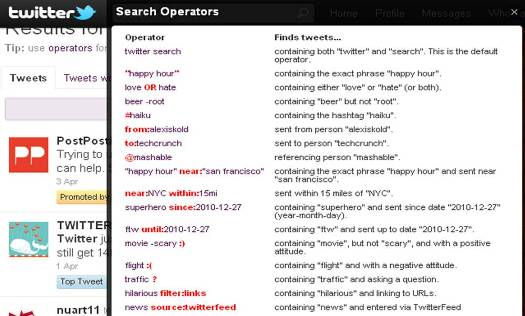 Twitter is improving they way you can find people to follow in your area of interest by using “emotional search”.

Announced in a blog post yesterday – Twitter explained that not only can you now search for people who are influential on a particular topic – you can also search for how they feel about it.

That’s not going to be relevant to everyone but on polarising issues like “Proposition 8”, Sarah Palin or even just Manchester United – people would generally prefer to follow people with similar viewpoints.

Another big innovation is that a search for “hip-hop” will now return everyone tweeting about hip-hop rather than just people with “hip-hop” in their name. This makes themed search much more useful.

The cute bit is that you search for this stuff with a smiley (see screengrab above) — so “Sarah Palin :(” would return you the profiles of people who often tweet about Sarah Palin but largely in a negative capacity.

Then Twitter parses the text of everyone’s tweets and uses them to work out whether the emotions they attach to words are overall positive or negative.. You can also search for tweeters based in particular city or in a given radius of where you live..