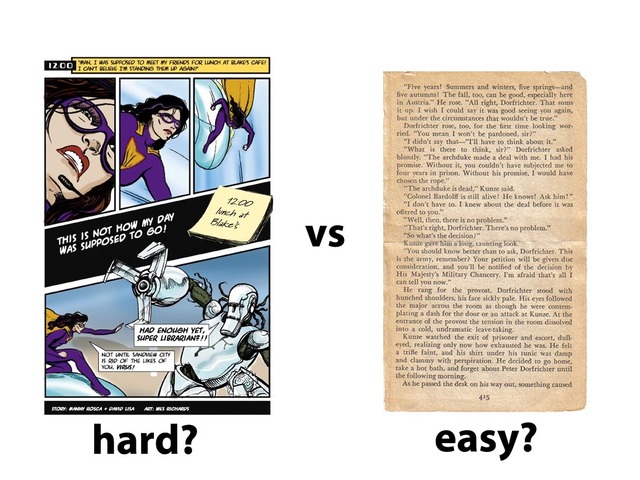 I always thought comics were easy reading. Way easier than normal books. To me – they are the snack food of the written word, the poptarts of literature – they’re covered in pictures for goodness sake.

But I’ve recently met two people who can’t read comics, and not because they’re afraid people will think they are hairy loveless nerds. They actually find them hard to read. I didn’t realise this could be a thing, but thinking about it, I guess it is.

And the other one, a guy who is a bit dyslexic though works as an animator, finds the set up too confusing. Apparently he learned the normal left to right way of reading novels much more easily than the set up with comic books, and still gets mixed up by complicated or experimental layouts.

Though there is a general consensus that comics are like picture books and thus easier to read than books without pictures — this professor at least thinks they are just as hard as normal books:
“if you really consider how the pictures and words work together in consonance to tell a story, you can make the case that comics are just as complex as any other kind of literature.”

Anyone else found this? Should comic nerds get credit for reading and understanding spatially complex stuff rather than being patronised for reading picture books?
I think so….