If you think the world is full of enough people making bad jokes, then you may not be delighted to hear that Scottish scientists have just invented a computer (and website) that makes bad jokes too.

The Joking Computer software is programmed to make jokes and then it gradually learns to make better jokes using feedback from visitors. More than can be said for my dad anyway. 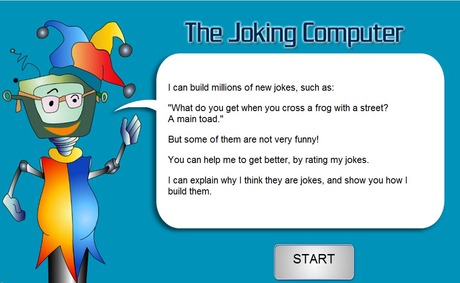 Using a large dictionary of language and some simple rules, The Joking Computer has the capacity to build millions of different jokes though all of them follow the same format: “All the jokes are question-answer puns, like those you get in Christmas crackers.” explains Dr Judith Masthoff, one of the scientists at Aberdeen who developed the joke-maker: “The software allows you to see how the joke-making process works. Or you can choose roughly what sort of joke you want, and have the computer build a new one.”

The Joking Computer was dreamed up to help kids with cereberal palsy improve their language skills.

I have to say, I do worry that coming up with jokes like that may in fact hinder rather than help these kids in social interaction.. But still, some insight into jokes is better than no insight into jokes, and of course the site as a whole is a useful resource in learning which jokes aren’t funny and why things are or aren’t humourous. And let’s face it, it’s always nice when someone makes the effort to crack a joke. Even when that joke is:

Q: why is a curious visual image different from a shining battle ?
A: one is a funny sight , the other is a sunny fight .

I’m laughing but not for the right reasons.

After the joke you can rate it, and deconstruct where it all went wrong.. 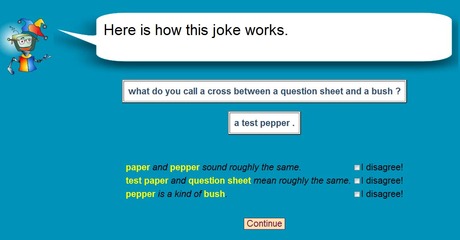 Anyway, it’s a good site to while away some time, potentially help children learn what good jokes are and who knows, find a gem that you can casually drop into your own conversation to make your friends rofl. NB, it won’t be the one below. 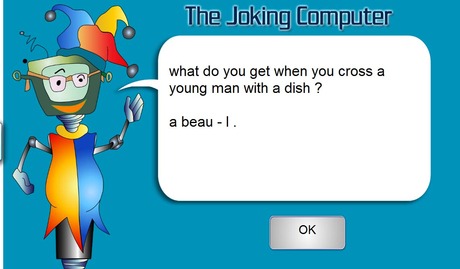