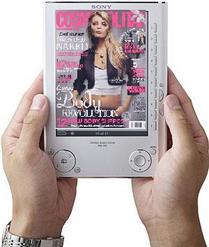 Typical. We have a drought in the eBook world for ages, then two announcements come at once. We’ve just told you about the revamped BeBook coming to our shores soon, and now it seems it will have a little more competition, with new of an eBook created my magazine publishers Hearst. The current economy hasn’t been kind on magazines sales, with numbers falling and subscriptions dropping off, faster than you can offer people a lo-carb diet.

Well to counteract this, the clever bods at Hearst have decided that an own branded eBook reader may be the answer to their problems. Hey, we’re not complaining, as the more competition on the market means prices will drop faster.

Hearst is currently developing an E-reader to feature their publications on. As they currently represent a large number of brands, with Cosmopolitan and Esquire under their wings, the potential to reach non techie consumer is huge. The device is rumoured to be A4 size rather than than 6×6 inch screens we’re familiar with on eBooks, as they say they want to replicate the magazine reading experience. This means it will come complete with ads, which may not please everyone.

You also have to wonder at the know how behind this reported device, as it has been mentioned that Hearst would like to use hi-resolution colour in their new device, a feature which people would love but would prove ridiculously extravagant in terms of cost. The idea is that the heart reader would incorporate W-Fi technology so you could download your favourite magazines for a fee. Video options have also been mentioned, and I’m curious as to whether this ‘reader’ will actually be an ebook or a stretched out PMP with added resolution to make reading easier.

Hearst plan to sell these devices to the publishers and then take a cut of the profits, meaning that the final decisions regarding style, payment options and connectivity will be left up to the publishers, who won’t want to relinquish control very easily.

Time will tell, but Q3 this year has been suggested.