As you might have seen, we recently headed off to Las Vegas for the Consumer Electronics Show (CES). Naturally, we needed some dollars. Rather than visiting a bureau de change or just using our cards when we got there, we tried a more future-facing service: WeSwap.

It’s an app and website that lets you swap currency with other people, which means you get more bucks for your pound. We all know currency counters charge commission, even the ones that say 0% (they build it into the exchange rate instead), with the ones in hotels and airports giving you a particularly bad deal compared to the actual market rate.

Credit and debit and credit cards, meanwhile, will charge 2-3% per transaction, and if you withdraw cash, credit card providers will slap interest on that too. If you’re buying lots of things abroad, as I recently did, you can easily have half your statement eaten up with “Non-sterling” charges ranging from pence to pounds. And they really add up.

WeSwap claim to be one of the cheapest currency services around – they swap your money at the actual market rate, and then charge a flat 1% fee. There’s an example on their website of how they can work out cheaper than a supposedly 0% bureau de change:

So far, so good. But what’s the experience like?

When you sign up for WeSwap, you get a prepaid WeSwap MasterCard through the post. Mine took less than a week to arrive, but they quote up to 10 days, so make sure you order it in plenty of time before your trip.

Activating the card necessitates a phone call to customer service (I’d rather have done it online), and the automated voice service told me that my card number was invalid. After multiple tries, the WeSwap team had to do it for me – but in fairness, they responded very quickly and had it sorted out within hours.

WeSwap assign you a PIN, which you can change at cashpoints (but again, not online) that you can use to pay with your WeSwap card. Then you just need to set up your swap.

To get the currency you want, you just add credit to your WeSwap account from your bank account or debit card in your home currency (GBP for me), then say what you’d like to swap it for. I loaded £50 and asked to swap the whole lot for US dollars. You can set an end time for your swap if you’ve got a deadline (ie a holiday), then it’s up for swapping by the WeSwap community. Any member of WeSwap who’s got the currency you need can swap part or all of your money for theirs, or you can swap with people you know – swapping with people you invited is free.

If your swap isn’t completed by the deadline you’ve set, WeSwap will step in and fund the rest themselves (for an additional 1.5%), so there’s no risk you won’t get your money. When I first posted my swap, I thought WeSwap would have to fill it for me, because after several hours, there was no activity. But after just over 24 hours (I’m impatient), my swap was fully funded by a user. I paid the market exchange rate for that point in time, plus WeSwap’s 1% fee, which came out to $0.77 on $75.87. Can’t argue with that. 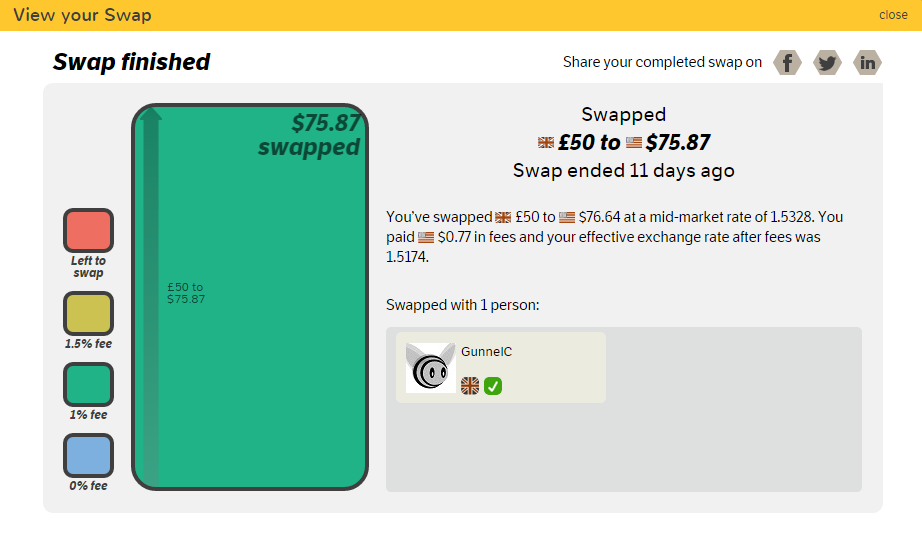 Your WeSwap card should be accepted anywhere that takes MasterCard. I tried it in a Walgreen’s and a Forever 21 in America (it shows you the transactions online, like any credit card) and both accepted it without hesitation. I didn’t get to test the PIN because they use signatures over there, but a UK ATM accepted it.

You can also – brilliantly – use your WeSwap card to withdraw money from cashpoints abroad with no fees. That’s much, much better than withdrawing money from a credit card, paying a fee, and then paying interest on top of that.

Would we recommend WeSwap?

Right now, the WeSwap user base is a bit small because they’re fairly new, and obviously they’ll need a lot of people worldwide to be able to supply all currencies. They currently offer 16, but that covers all the most popular currencies, including Euros, Rand, Yen, and Canadian, US and Australian dollars. 9 of those currencies were added in the last week, so it looks like they’re expanding rapidly. 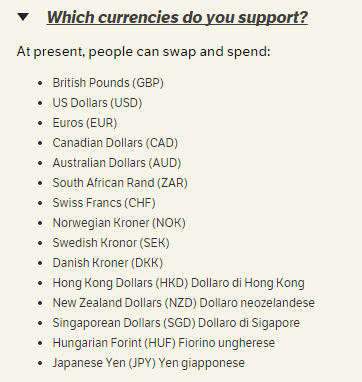 The experience of setting up, swapping and spending was all pretty seamless (teething problems notwithstanding), and it certainly worked out a heck of a lot cheaper than all those non-sterling credit card fees. We also think WeSwap would really help you stick to a holiday budget rather than going crazy – it’s easy to overspend when everything feels like it’s priced in Monopoly money.

WeSwap is available for web, iPhone and Android.