We saw a lot of amazing things at CES this year. A robot that can help seriously ill people see the world. A pair of motorised roller skates for walking at double speed. A WiFi battery that lets you turn your smoke alarm off from your phone.

But we also saw something we wish we hadn’t: a whole lot of sexism.

It’s 2015, people. Do we really need ‘booth babes’ anymore? Half-dressed women gyrating on podiums to sell speakers? If you feel the need to resort to this, 808 Audio, what does that say about your products? 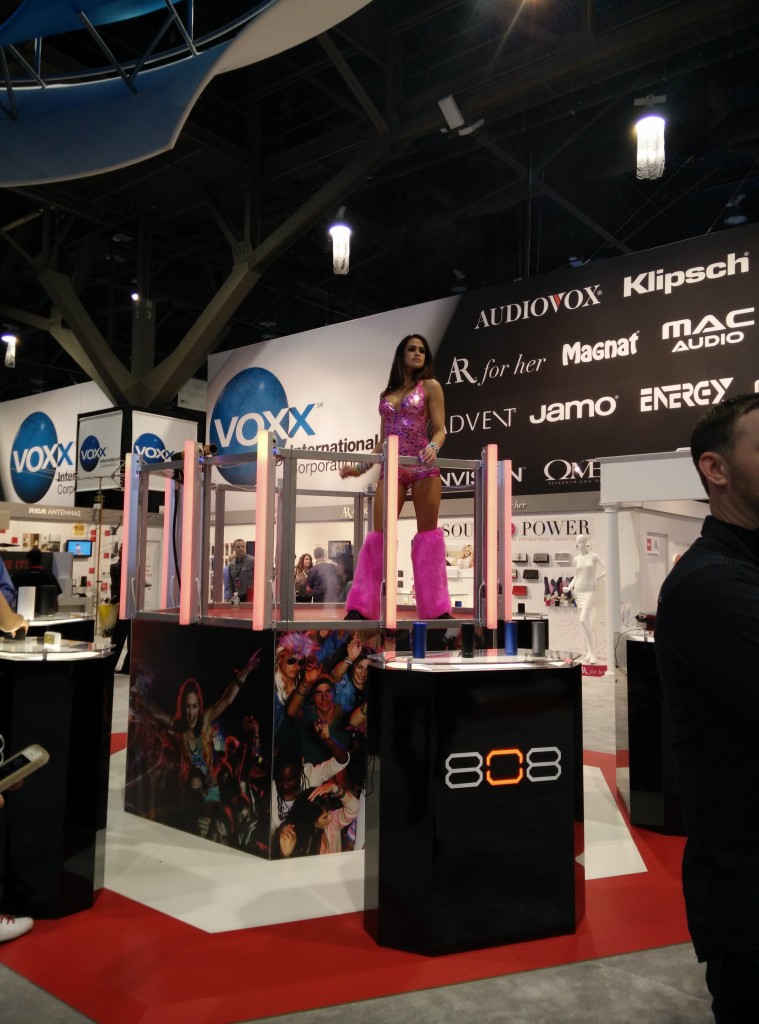 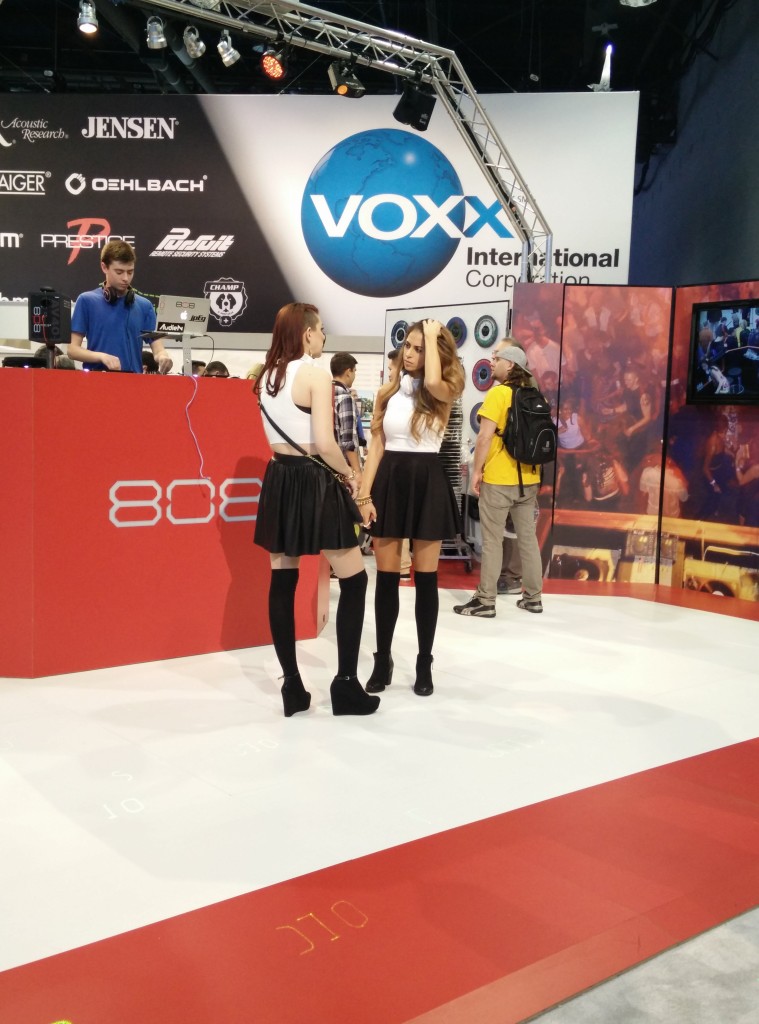 We reached out to 808 to ask them. Predictably, they couldn’t manage a reply.

The same goes for Ooma, who thought the best way to sell their free phone calls (ooh, in 2015? Groundbreaking) was to put two ladies in matching short skirts and sky-high heels at their stand: 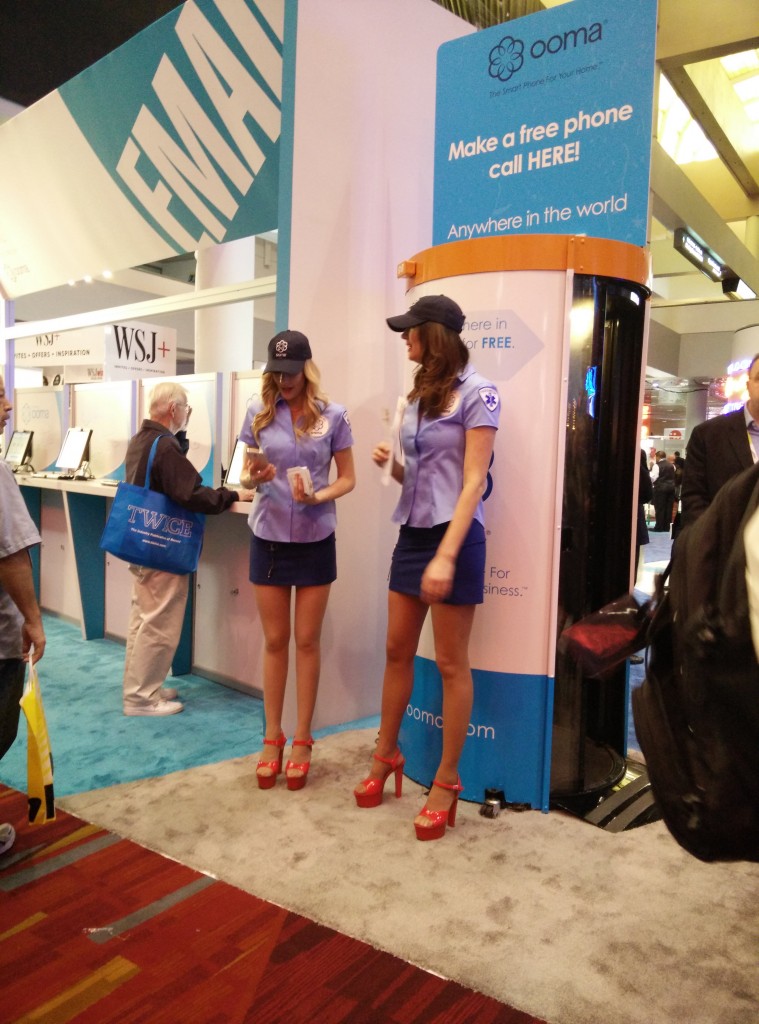 Again, we reached out, and again they ignored us.

Then we arrived at the stand of the legitimately very cool IO Hawk, a kind of mini-Segway. But innovative ideas and great tech aren’t enough, you guys. Why don’t we add some women in schoolgirl-esque uniforms to REALLY sell our product?

There were lots of women in the same outfit at the IO Hawk stand, but not to talk about the product. All the talking, explaining and selling was done by their male colleagues, because we don’t know much about tech, right ladies? Ugh.

At the Audiology stand, a lady showing quite an alarming amount of breast was standing on the show floor beside the products. Assuming (and hoping) she was there for her knowledge and not her figure, I asked her a question about a product I was genuinely interested in. She looked baffled and pointed me to one of her male colleagues.

CES was, at a conservative estimate, 90% male this year (Chrissy Teigen commented that her plane was “all dudes!“). Isn’t it hard enough helping women feel welcome in the bro-heavy tech space without reducing our entire gender to decoration?

And it’s not just the bussing in of attractive women to draw attention that bugs me. It’s the treatment I got from a lot of brands at CES, too. When I was walking the show floor with my male colleague, tech reps came right over to us and told us about their product. Once my colleague left, I was pretty surprised to find that people stopped approaching me entirely. I could walk right into a booth, start looking at a product, read the blurb, take a photo, and in one case film an entire video and no one would so much as wave. Yet when I was with a man, they’d come and talk to us when we were just vaguely walking in the vicinity of their stand. As it happens, my colleague Ashley is the Commercial Director, and doesn’t write any articles. If a brand wants to be featured on ShinyShiny, it’s me they need to talk to. But I don’t have a penis, so they didn’t waste their time.

Of course, not all male tech reps ignored me. Far from it. In fact, two came over to ask for my phone number and one spent an inordinate amount of time talking to me about anything but the product, after which it transpired that it’s not even available in the UK (which he knew, and his first question had been what part of London I’m from). I found this out when his boss came over, holding out a switched-off mobile phone, and said “it’s your wife.” Subtle.

Seriously, though – I’m happy to say that the vast majority of brands at CES didn’t use booth babes, a good proportion didn’t ignore me when I was on my own (though I’d say it was about 50/50, while almost all paid attention when I was with a man), and many were inclusive and welcoming to women. Some were downright progressive, like the brilliant Parrot using Conchita Wurst on their stand: 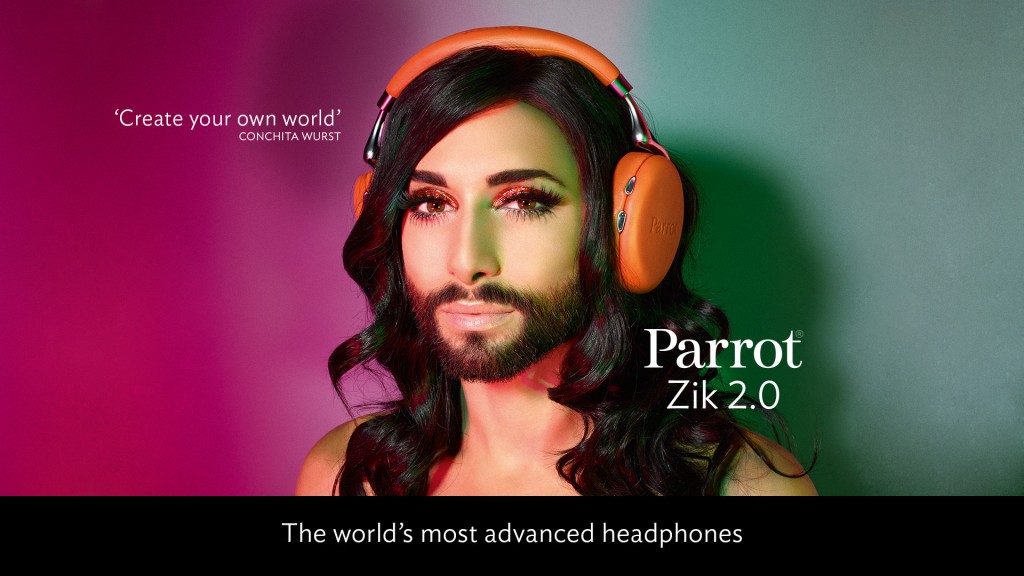 Thankfully, the world of tech is gradually becoming more open to women. But at CES, brands like 808, Ooma and IO Hawk are sad reminders that not everyone’s ready to join us in the 21st century yet.

I’ve been on the internet long enough to know that the more easily outraged among you will have some questions about this post. I’ve tried to pre-empt them so you can use your time for something more productive.

What if the booths had half-naked MEN? You wouldn’t be complaining then, huh?

Someone actually asked me this on Twitter. I didn’t see a single ‘booth hunk’ in my entire time at CES, but if I had, I’d have been equally disheartened. While it’d at least be more equal if the objectification went both ways, CES is a trade show. A work event. Yes, it’s Las Vegas, but it’s not a strip club. Having sex objects on your stand is a sad way of telling the world that you don’t really believe in your products, and the only way you can hope to interest people is by encouraging them to ogle. Is that the kind of customer you want?

You blame men for hiring ‘booth babes’, but what about the women themselves? Aren’t they in the wrong too?

I’m a firm believer that as long as people are clued-up about what they’re getting into, they’re entitled to do any job they want. People are constantly surprised that I can believe in women’s rights and also be OK with places like Hooters, but if the women there are happy with the job, I’m happy for them. Similarly, if the women on the booths at CES were OK with being there as eye candy, knowing nothing about the products, then that’s their lookout. I personally wouldn’t do it, but that doesn’t mean no one else can.

The crucial difference is that the people hiring ‘booth babes’ aren’t just representing themselves. They’re representing their entire brand. And if they feel that their brand is best represented by sexism, well, they won’t be selling any products to me.

You’re picking on one tiny subset of the exhibitors at CES. What about all the ones that didn’t use women this way?

It’s a happy fact that the majority of people won’t do odious things. That doesn’t mean we shouldn’t talk about it when some do. The fact that this still happens at CES is worth commenting on, because it shows what women in tech have been saying for aeons – the problem is far from solved.

I love this one. I get it a lot when I call out racism, sexism, and general inhumanism from brands on Twitter or my blog. Yes, I do know I’m giving them publicity. But what I’m giving them is negative publicity. Until I saw them at CES, I had nothing against any of the brands listed here and would have considered their products on merit. Now I know that supporting them would be putting more money in the pot for next year’s ‘booth babes’. So next time I’m shopping, I can choose a progressive brand like Parrot, which is the only one to get a link in this post.

If you honestly believe that we should never talk about people doing unpalatable things because it gives them publicity, I wonder what your views are on the news. Would you rather not know that the building next to you is on fire because that gives the arsonists exposure? Should we not mention when public figures make racist comments in case one more person learns who they are? Should we have continued eating horse meat in our food rather than give the guilty companies free airtime?

If so, I’d suggest closing this post now. You’re only giving me attention.