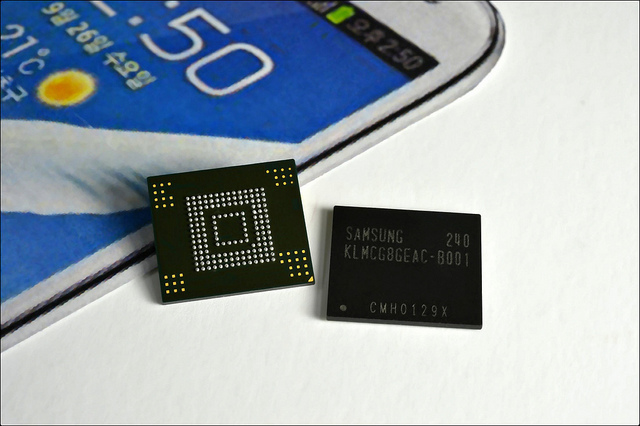 Buying a phone can be tricky, especially if you don’t really know what you need to be looking out for. Or maybe you do know, but all the numbers and component specs confuse the hell out of you. Then again you might understand it all perfectly but find yourself feeling incredibly indecisive – after all, there are so many smartphones to choose from nowadays!

Whatever the reasons you have for struggling to pick out a new phone, we have you covered with our guide all about what you should be looking for when you’re checking out the latest upgrades. 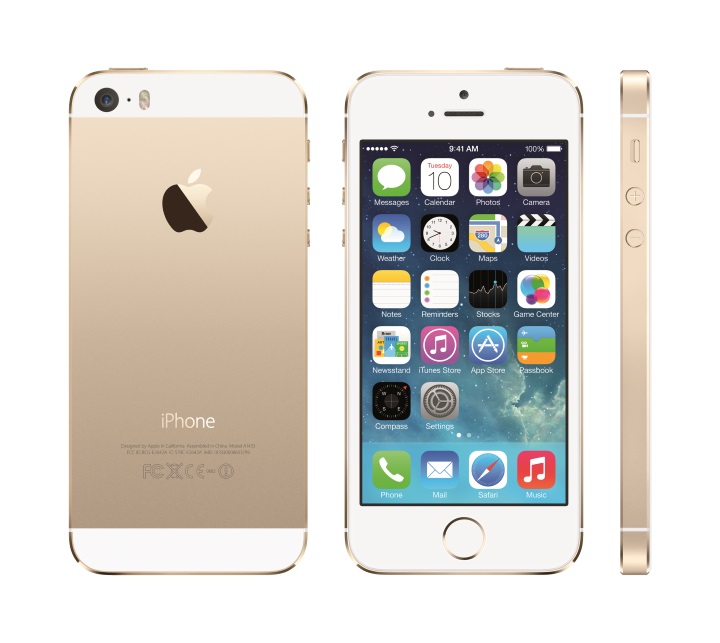 The best phone in the world is practically worthless if you think it’s an ugly piece of rubbish that’s embarrassing to have out in public, that’s just not practical. So what it actually looks like is bound to be the first thing you consider when you’re looking for something new.

There’s nothing really to tell you what to be looking for here since it’s all down to your own personal preference. Maybe you love the iPhone, but think the iPhone 5C’s plastic shell is foul and tacky, or maybe you like a multi-coloured plastic phone, but you think gunmetal is hideous. Pick something you personally like, because if you don’t it’s all a bit pointless.

This is probably the most important hardware spec to consider, simply because you’ll be wanting a phone that lasts throughout the day rather than something you have to charge up every few hours or so.

The first indication of how good the battery should be is the capacity, which is measured in mAh. The higher that number, the more power the phone’s battery can store at any given time. It’s not the only thing though, capacity is worthless if the phone itself is incredibly inefficient and uses ridiculous amounts of power to keep itself going. Usualy manufacturers will include an average battery life, so make sure to look for that before looking at online reviews to see how accurate it is.

Most reviewers will test the battery life under conditions that are expected to use up a lot of power (here at shinyshiny it’s usually streaming a two hour video over Wi-Fi at maximum brightness). If a phone does well under such tests, then the battery life is probably going to be pretty good. 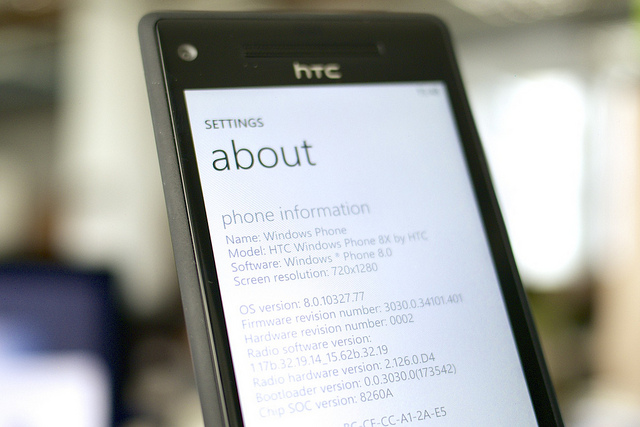 This one is nice and simple, look at how much internal storage it has and whether or not it has microSD expansion. Storage is a rather important feature t have if you’re planning on downloading a lot of apps, or doing things like taking lots of photos. Ideally you want a decent chunk of free internal storage, and if you can expand that even better. If there is no expansion you might want to shell out slightly more cash for a model with higher storage. 8GB is probably ok for an average user, but if you want to be storing a lot on your phone you really want 16GB and up.

Just remember to look at how much of the internal storage is actually free, virtually all phones have redundant software built in that you can’t remove — so it’s essential you take that into account. Contrary to what a lot of camera and phone manufacturers would have you believe, the sign of a good quality camera isn’t determined by how many megapixels the photos have, the only major noticeable difference you’ll get from something like the Nokia Lumia 1020 (and its 41MP camera) is photos that take up an enormous amount of storage space. That’s not to say you should go for a phone with a low-resolution camera either. High resolution photos are useful if you’re planning on blowing the photos up later on because it decreases how blurry they get.

When you’re looking at a phone there’s a lot more to look into, like the light sensor or how fast the shutter is. If you are someone who doesn’t have a clue what any of that means, or if you’re not sure, a good indication is again to find reviews online and look at the photos they took. Usually they’re pretty extensive so it’s a decent way to sure of what it’ll be like if you buy one. 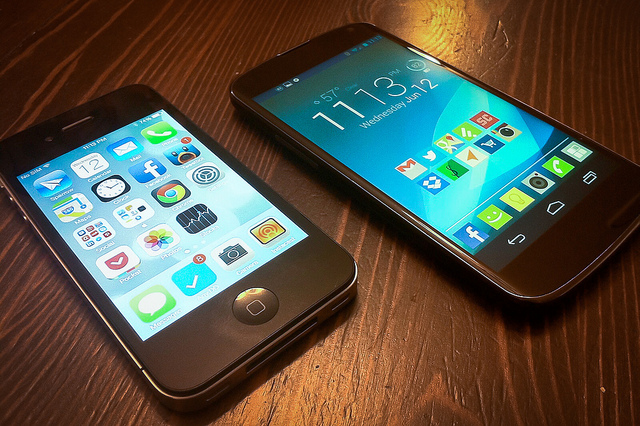 Fundamentally there isn’t much difference, but iOS and Android share much more with each other than they do with Windows Phone. The major difference is that with Android you go through Google, whereas iOS goes through Apple. A minor difference is that app developers in the US and Europe tend to favour releasing apps on iOS before they consider releasing on Android, however the majority of major apps end up as multi-platform releases eventually. Windows Phone is different since it doesn’t have as much support from apps developers, meaning Windows Phone users often have to rely on unofficial third-party apps developers creating their own clones of popular apps and services. 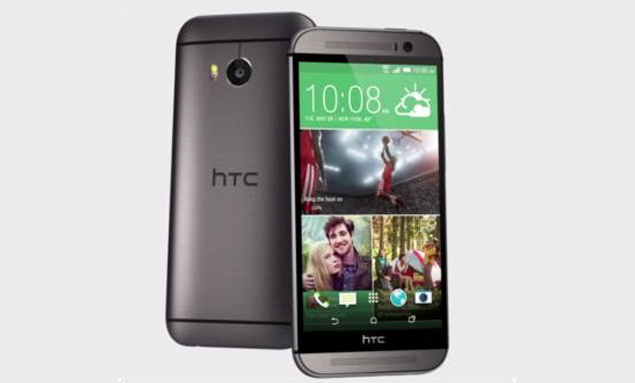 You can’t use your phone without a display, and a terrible one can really tarnish your experience with a device. The main thing to look for is that the phone has a decent number of viewing angles, because you don’t want to have to hold it in one exact position to use it effectively. Most phone shops have display models on show where you can test this yourself, but if that’s not an option is also something reviewers look into. Another thing to look into is the resolution, or specifically the display’s pixel density. Resolution is a good starting point, but with differing phone sizes the actual quality of the image can vary quite considerably with phones that are “1080p”. The pixel density, on the other hand, measure the pixels per inch (ppi), so the higher the ppi the better resolution your phone’s display will have.

That being said the you do need to pay attention to the resolution itself. A 720p 443ppi display is still lower quality than a 1080p 443pi display.

These two generally function in tandem, and a good point of reference is that the higher the numbers the better the technology is. For instance, a 1.5GHz processor is generally better than a 1.2GHz, and a quad-core is better than a dual-core. Similar with RAM, the more you have the faster your phone can handle commands. The main thing to focus on is that a great processor is useless without a decent amount of RAM to handle it, and vice versa. The better these two are, then the faster your phone will run and the better it will be able to handle various functions. It might not be important to a lot of people, but it’s certainly a factor to consider.

Probably the most important thing to consider when buying a phone is how much it’s going to cost you. It’s all well and good finding the phone with the perfect hardware and software for you, but if you can’t afford it them you’re just wasting your time looking around. That’s not to say price should be your only defining factor in the decision to buy a phone or not, it’s just incredibly important to map out the expense.

The key is to shop around and find all the various network deals and prices that are available. When you’re buying you have two real choices: buy it SIM free and use a your own PAYG or pay-monthly SIM card, or get it from the network on a two year contract. Once you’ve done your research you need to get your thinking head on and work out the total cost. Say for example an iPhone 5S costs £450 for a SIM free handset and an extra £15 a month for your contract you’ll end up spending £810 over the course of two years. The same 5S and contract might be £42 a month for two years, and you get the handset free. In this instance buying the SIM only option is about £200 cheaper than getting in on contract, meaning if you can afford it’s a better financial choice to pay for the phone separately. This might not always be the case, networks may be offering deals or bonuses at any given time, so the key thing is to do your research properly and figure out what’s best for you.