Samsung has just wrapped up it’s IFA press event, finally putting a number of those pesky rumours to rest by revealing its new portfolio of products to the world. Not only did we hear more about the Gear S smartwatch, we were also treated to the public unveiling of the Galaxy Note 4, the Galaxy Note Edge, and the Galaxy Gear VR. But what exactly are all thes products, what do they do?

The first thing that’s immediately apparent is that the standard version of the Galaxy Note 4 does not have a curved display, that’s exclusive to the Note Edge which I’ll talk about later. The basic design of the phone is that it has a metal fram like the Galaxy Alpha, a 5.7-inch QHD (2560 x 1440) Super AMOLED display made from a new stronger and durable version of Samsung’s 2.5D glass. It weight 176g, is 8.5mm thick, and will come in a choice of black, white, gold, or pink. If you have enough money to spare then you can get a version that has Swarovski crystals embedded in the case.

Samsung was also eager to show off the new user interface and the changes they have made to the software. Designed to be easy to use and fun, the new interface includes transparent widgets that let you admire your background, a dynamic lock screen with thousands of dynamic images installed, and multi-tasking options. The multi tasking is designed to let you use two different apps at the same time, on the same screen, and examples were shown of taking notes from web pages, and checking someone’s Facebook page while you chat to them on Hangouts. Why you’d do that instead of chatting on Facebook I don’t know, but I digress. Multitasking in the Galaxy Note 4 will allow you to minimise app windows to get them out of the way, have windows within windows on-screen, split-view mode which dedicates equal screen space to multiple apps, and on-screen icons that let you load up minimised windows at the touch of a button.

Samsung’s famous S Pen has also had a remarkable update, and has been redesigned to be quicker and more precise than a finger. In fact it was referred to on stage as being the closest thing you can have to a mouse for your phone. The pressure sensitivity is double that of the pen that came with the Galaxy Note 3, with the intention of making writing on your phone almost like using a real pen. The S Pen is now vital for using what Samsung calls “Smart Select”, which essentially functions as an advanced version of copy/paste by allowing you to capture and save several things in a row for later use.

Of course, what would a phone reveal be if we didn’t know about the camera? Samsung’s goal is apparently to ensure that people are able to use their phones to take great pictures, pointing out that that photo quality and ease of use were key to this. The Galaxy Note 4’s rear camera is 16MP, with optical image stabilisation (OIS), while the front camera is a 3.7MP camera with a F1.9 lens to improve the clarity.

With a great long speech about the importance of selfies, it was revealed that the Galaxy Note 4’s front camera is able to take faster and sharper images, as well as being able to detect 60% more light than its predecessors — meaning it will be able to take great pictures even in low light environments. To aid the issue of keeping your camera steady when taking a selfie, Samsung has also included a rear shutter button (located underneath the rear camera) that makes it much easier to take a quick snap with the front camera. Oh and there’s also a new mode that’s dedicated to taking wide angle selfies, a bit like panorama mode on a regular camera.

Samsung admitted that the Galaxy Note 4’s battery capacity is only 20 mAh higher than the Galaxy note 3’s 3200 mAh, but promised that because the new phone is far more efficient in how much power it uses that battery life has been significantly increased, despite all the new features. Details on battery life were strangely absent, though. Also included is the Ultra Power Saving mode from the Galaxy S5, as well as new fast charging which promises to charge your phone from zero to 50 per cent in 30 minutes (down from an hour).

Three extra microphones have been included for enhanced quality during calls and voice recording, as well as new modes that alter how the microphones work. Meeting mode allows for recording from eight different directions, and another reduces ambient background noise.

Other than the S Pen, Samsung revealed a number of new accessories for the Galaxy Note 4, including  four new interactive covers, S View, Flip Wallet, LED Cover (similar to the Dot View case from the HTC One M8), and the S View Wallet that we saw with the Galaxy S5. Samsung has also formed a partnership with stylish pen manufacturers Mount Blanc, to bring a new kind of stylus to the Galaxy Note 4 — one that functions as both a stylus and a pen and resembles a fountain pen in terms of design. Mount Blanc will also release a flip cover, one made from real leather.

In addition to all of the above, Samsung announced its new rewards system called Galaxy Gifts, which will allow Samsung users to access special deals and content. Very little was revealed, but it was mentioned that owners of the Galaxy note 4 would get 50GB of free Dropbox storage for two years.

Samsung didn’t mention anything about the price, which is incredibly helpful for everyone.

The Galaxy Note Edge is like the Galaxy Note 4 in every way except that it has the fabled curved display we’ve been hearing about in the rumour mill over the past few months. The curved display takes the form of an extended screen on the right-hand side of the phone which can be used for a number of different things. Essentially the extra screen is to enhance your mobile experience by taking some of the annoying things out of the main screen. News, sports results, notifications, and quick access toolbars will be present on the Edge’s extended screen.

The Edge screen will always remain visible so you can check up on your phone without having to load up the entire screen, saving the phone’s battery in the process. It also features seven customisable scrollable panels for this very reason, as well as becoming the new home for things like camera and video controls, so that they don’t take up the space on your main screen.

Samsung was clear that the Edge would only be available in “limited markets” but they didn’t specify which. Once again they didn’t mention any price details. We already knew about this one since it was announced last week, and much of what Samsung mentioned has already been revealed. That being said, there were a number of features that were brand new. The most irritating was the revelation that the Gear S is not as independent from the smartphone as you might think. Yes it doesn’t have to be within close proximity to a smartphone for it to be able to make calls and answer texts, but if you want a Gear S you’re going to need one of 20 unrevealed compatible smartphones in order to activate it and update the software. So much for an independent smartwatch.

Samsung also revealed that all of the 1,000 Gear apps that are already available will be compatible with the Gear S, it will have a number of different watch faces to choose from, will come with a full QWERTY keyboard, and is capable of receiving notifications from your phone regardless of whether or not they’re in close proximity to one another. It will of course come with a number of customisable straps, including the Swarovski crystal embedded strap that we saw earlier this week.

What was very interesting to hear about was Samsung’s S Health functions that will be present on the Gear S when it launches. Not only will it be compatible with Samsung’s Gear Circle wearable when you’re exercising, it will also come with a built in UV sensor, and Nike+ integration to make your running experience more useful and enjoyable. 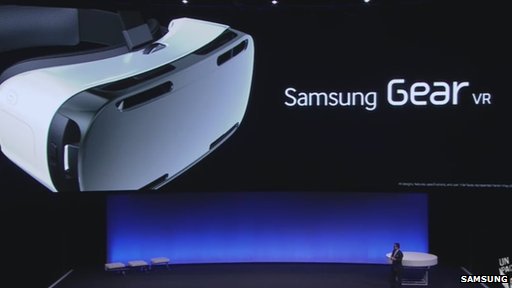 Details on the functions included with the Gear VR were very few and far between, but what we do know is that the virtual reality headset will be powered by the Galaxy Note 4, will include a QHD Super AMOLED display that has a 96 degree viewing angle. For those of you who aren’t sure of what this means, it basically means that you are experiencing the same thing you would see if you were two metres away from a 175-inch television. There will also be a cinema mode that will allow users to experience 360 degree film content.

There you have it, that was Samsung’s IFA press conference. There was a lot of information in there, which is exciting, but it’s just irritating that we don’t have any price details yet, not do we know when the devices will be available for pre-order.