British users wanting another way to get internet content on their telly have some good news coming next month: the high street retailer Currys are due to start selling the diminutive dongle from March 1st. 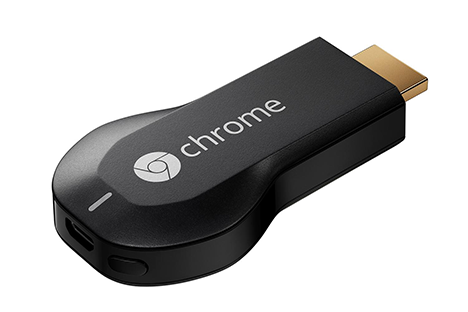 If you’ve never heard of Chromecast, don’t worry – it has flown rather under the radar as Google have cautiously built the device up over the last year or so. Essentially, it’s a USB-stick style dongle, that plugs into your TV into a spare HDMI slot.

Once setup, it connects to your wifi network and will allow you to wirelessly stream content straight to your TV from your computer, phone or tablet at the click of a button. For example – if you browse YouTube with a Chromecast on the network, a button will appear in each video’s toolbar offering the chance to play it through the TV instead.

On a technical level, the way it works is that the dongle is essentially a miniature computer – the dongle runs a version of Google’s own Chrome OS – so it can run videos independent of the device that triggered them (ie: you can start a film playing on Netflix, and then switch your computer off without stopping it).

The limitation until now, for American users of the device has been the limited number of supported services on the device – apart from YouTube, support has been thin on the ground with only Netflix, Hulu (the American equivalent of iPlayer) and a few others offering Chromecast support. This looks set to change as, almost in-line with the UK release, Google have opened up the software development kit – which means many more websites and apps will be able to support it very soon indeed. Fingers crossed this means that we’ll get support for the likes of the iPlayer and 4oD.

What’s especially attractive about the Chromecast as a device is the price: we’re expecting it to be around £40 at the most – making it a no-brainer for those who have so far resisted getting connected in the living room. Look out for it from March 1st!