Tinted photo enthusiasts Instagram have today added another string to the popular app’s bow – by adding a feature they’re calling “Instagram Direct”, or private messaging to you and me.

The new feature is exactly what it sounds like – if you take a picture that you’d like to share with only specific individuals or groups of up to 15 people, then you can shoot it or import it as you would with normal Instagram uploads, but then choose who to send the photo to specifically. I don’t know about you but I’m 100% sure this will only be used for completely above-board and family-friendly purposes.

Once a photo has been sent, the comments area beneath also becomes like a chat window with push messaging – clearly Instagram have been spooked by the success of Snapchat. Another interesting feature was how it chooses who can send you messages – in order for someone to be able to send a photo, you must be following them (like how Twitter decide DM permissions). Apparently though if you message someone and they don’t follow you, you’re not just told to go away, like with Twitter, but your message goes into a “Pending Requests” list for the receiver to enable you to send messages.

In a press conference from New York, Instagram co-founder Kevin Systrom showed it off what a sent Direct message looks like – it turns out that it’s a great means of passive-aggressively nagging your partner to buy some dog food: 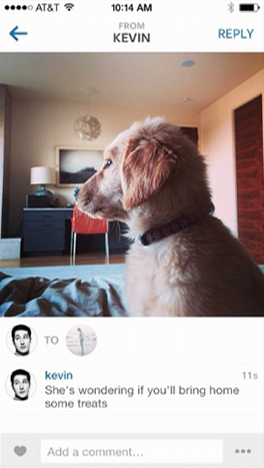 And here’s how it’s supposed to work in full. Here’s the selection screen for choosing who to send a picture to: 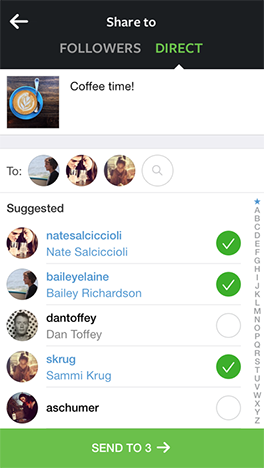 Here’s the listing of all of your recent Direct messages: 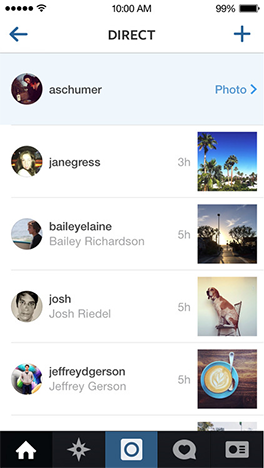 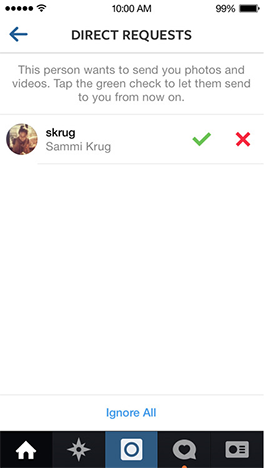 And of course, here’s what an actual direct conversation looks like. What’s interesting is that your friend’s profile picture isn’t entirely lit up until they’re seen the photo (in which case a green tick appears). If they like the photo – a little red heart icon will be added.
So this seems pretty cool – and is a nice extra for big-time Instagram users. 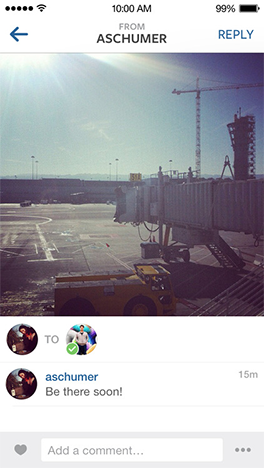 The updated app will be available on both the iPhone and Android app stores from today.