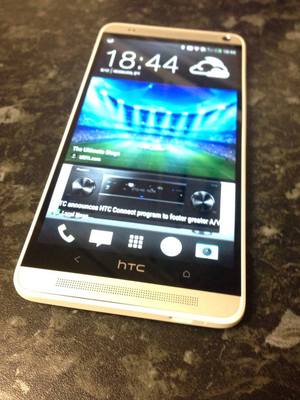 Things have been tricky for HTC over the past few years – mainly due to competition from rivals such as Samsung and Apple. Anyhow, despite this, they have managed to create possibly one of the world’s sexiest Android smartphones – the One. And now we have a much larger, coughs, phablet, version of it, the One Max, matching the recent trend of phone-tablet hybrids that seem to be slowly taking over the whole marketplace.

The One Max is an absolutely huge handset measuring in at 164.5 x 82.5 x 10.3mm – which isn’t at all good for keeping in the average trouser pocket. Well, unless you want literally half of the Max hanging out of it? I also found it very heavy, weighing 217g. This reflects on the fact that it has been made out of metal, just like original One, which I suppose is nice as it feels a lot more expensive to hold when compared to the Note III, but I know there are a lot of people out there who would find it too large and heavy to use comfortably.

The front of the One Max is where you’re going to find the 5.9- inch display (that’s bigger than the Note III, but smaller than the Sony Xperia Z Ultra and Samsung Galaxy Mega), BoomSound dual front stereo speakers, along with basic stuff such as the speakerphone, front-facing camera and sensors. I personally find the overall handset attractive, but the front just does it for me: I’m geeky like that.

Now let’s look around the sides of the phone: the left houses a button that allows you to take the Max’s battery cover off, with the volume rocker (which was extremely responsive when in use) and power/lock button (also responsive) placed on the right. You’ll find the micro-USB port down the bottom and the 3.5mm headphone jack at the top. Very basic stuff, but nicely placed, in all honesty.

The back is very interesting. First of all, it’s concave in appearance, offering up a metal back-plate as opposed to a full unibody. The plate keeps the battery from falling out of the One Max – although I really did find it very flimsy when testing – and it’s not exactly easy to get on and off. But more than this, you can see the camera lens and LED flash, along with that all-important fingerprint sensor (which I’ll take about later on) and the wireless charging sensors.

With most of the HTC products that I’ve reviewed before, I’ve always found their displays rather impressive. Again, I’m impressed with a display on a HTC product – the One Max which sports a 5.9-inch panel with a 1080×1920 resolution. I did a few tests inside and outdoors, was really happy with the quality that I got. Colours look overall sharp and vibrant, and the contrast was also good. It’s also worth mentioning that the touchscreen technology used is nice and responsive. No problems there.

The One Max comes running on the Android Jelly Bean operating system, with HTC’s Sense 5.5 actually powering the whole user experience. I personally would have liked to have seen the latest version of Android, KitKat, but I suppose we all have some sort of whacky dream. That said, I had no problems with Jelly Bean whatsoever, although the Sense UI, I thought, looks rather cluttered.

Just like the iPhone 5S, the One Max comes with the ability to use your fingerprints as a means of security. Whilst it seems good and all, I don’t think it’s as good as what Apple has done with its TouchID method – I just found the whole process of setting it up rather annoying and frustrating, added with the fact that it wouldn’t even recognise any of my fingers. Also, I think the sensor itself (located on the back of the Max) is dull and ugly. Looks like I have something against fingerprint scanners.

One of the most attractive things about the Max has to be its entertainment capabilities. It has a gorgeous HD display for watching movies on, along with two BoomSound stereo speakers that are built for crystal clear sound. I killed two birds with one stone by watching a mini movie on YouTube, testing the video and sound quality at the same time. I was very impressed.

The Max is a very fast when in use, thanks to a 1.7GHz quad-core processor and 2GB of RAM. To test its capabilities, I played a game of Angry Birds (a less power-consuming game) and a racing stimulator (a more power-consuming game), and had no problems at all. This just goes to show that the processor is excellent. You can also choose between 16/32GB of memory and get a 3300mAh battery that’s capable of lasting a day after being fully charged.

Possibly one of the Max’s headline features is its 4- megapixel camera based on HTC’s UltraPixel technology. The quality of photos taken in daylight are amazing. But despite this, I wasn’t that impressed when it came to using the camera in the dark – it just seems that the flash isn’t strong or bright enough to fix this problem. On a more positive note, you get full HD recording at 1080p that’s capable of producing amazing videos – both during the day and night.

If you’re willing to carry around a phone that’s almost the size of a skateboard, then the One Max could be the perfect option to go for. Ignore that – even though it’s big – because the Max is seriously an impressive handset, despite having some flaws. Maybe not as good as the Note III, but I still personally like it.