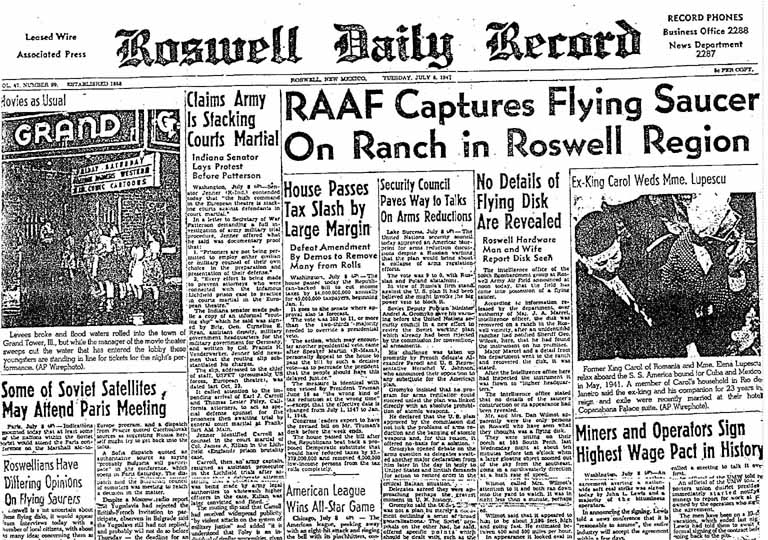 Yesterday Google celebrated the 66th anniversary of the Roswell incident, when an alien craft apparently crashed in the New Mexico desert, with one of its cute squiggles. Which got me thinking once again about alien life forms.

Give the number of stars in the sky there has to be a very strong probability that there is some sort of life on other planets. But to be honest, in spite of all those sightings, abductions and conspiracy theories I don’t think they have connected with us just yet.

It strikes me that if aliens were to make their presence known they might choose a busy Friday afternoon in Birmingham to fly their spaceship over. Or maybe a trip round Manhattan or quick sojourn in Tokyo,

But nope aliens choose Siberian deserts, New Mexico plains and more where their arrival is only ever witnessed by a tiny handful of, how shall we put this, enthusiasts.

It strikes me too that we are getting to the same stage with leaks of the next generation of iPhones (and other high profile mobiles too).

We always seem to be getting grainy images and iffy looking videos that have been delivered to obscure far eastern tech sites or Russian retailers.

Call me naive, but surely if someone were to grab an iPhone from a production line somewhere in China, they must be able to get better images and videos of it. And when they got the product they might be smart enough to think that there are other media in the world, that might make their story more believable. Ok so I know that after the Gizmodo case there are issues with this, but last time I looked that site was still thriving and hadn’t been bankrupted by Apple’s lawyers.

Then again I think that the ‘leaks’ do tell us something interesting about the people who are fascinated by them (and I’ll admit to lapping up every single one). It comes down to the whole reason for the social web in the first place – the ability to find out things and share them before anyone else. Sure that knocked off iPod like mobile from a Chinese factory probably isn’t the new budget iPhone, but can we afford to run the risk that it isn’t. We might as well share it anyway.

In a funny way too our obsession with the leaks has taken a lot of the fun out of the real launches when they come. Sure there’s that brief nano second when something new and utterly unexpected is unveiled, but we often don’t even pause to take that in before imagining what is coming next.

Ironically the leaks do tell us much about the phones they purport to be even when they are obvious fakes. Guessing the spec of mobile phones isn’t that hard these days – so in a funny way the leaks just confirm what we are already guessing anyway.

So I will continue to read every bit of gossip, but like you, each time I see a leak from an odd source I’ll think of aliens in the desert.