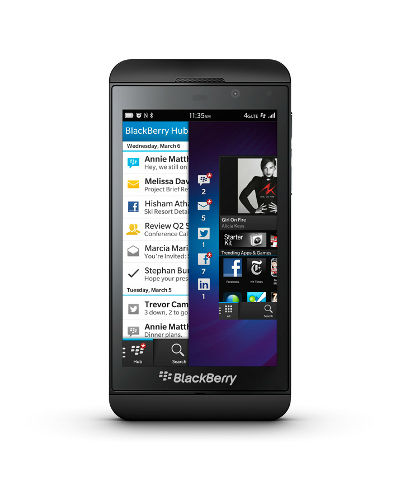 So it seems that the worst might be over for BlackBerry. With the Z10 apparently selling well in the UK, strong interest in the upcoming Q10 and a bit of a buzz about the brand’s devices – which frankly there hasn’t been in years, things are certainly looking rosier for the company.

The big question though is how well the Z10 will perform in the US? It goes on sale there next week and poor sales could once again mean questions are asked about the future of the company.

BlackBerry did however receive a major shot in the arm this week when it announced that it has signed an order with a company to supply one million BlackBerry Z10 devices. It has not said who the buyer is and what territory they are in, but financial institutions were clearly impressed as the company’s stock shot up.

Rick Costanzo executive VP for global sales at BlackBerry, said: ‘An order for one million devices is a tremendous vote of confidence in BlackBerry 10. Consumers are ready for a new user experience, and BlackBerry 10 delivers. With strong partner support, coupled with this truly re-invented new platform, we have a powerful recipe for success.’

So with the company seemingly on a more even footing are you once again thinking about a BlackBerry device? Is the Z10 a sexy handset for consumers or if it is successful is it just because it has once again attracted corporate customers?