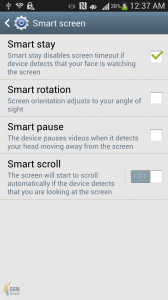 A couple of days ago we ran the story that the upcoming Samsung Galaxy S IV would feature a revolutionary new feature called Eye Scrolling.

As the New York Times reported.

The phone will track a user’s eyes to determine where to scroll.For example, when users read articles and their eyes reach the bottom of the page, the software will automatically scroll down to reveal the next paragraphs of text.

So the phone will be intelligent enough to work out when you have finished reading a page and skip to the next. No more constantly swiping pages on ebooks, or having to push the screen up to read new paragraphs on web pages.

Well if some leaked screen grabs that first appeared on an Israeli site are to be believed than Eye Scrolling – or Smart Scrolling – is a reality. Check out the menu which gives the users the option of switching the feature on and off.

Of course this could just be some mischief making, so don’t hold us to it.

The phone launches in New York on March 14th. 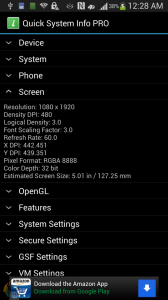