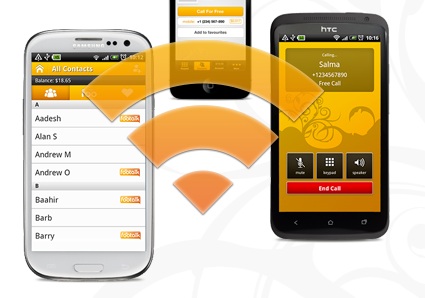 This could be an interesting one. British based company FooTalk has announced an upgrade to its app which will enable Facebook users to talk to anyone in the world freely via their smartphone.

Facebook Calling currently enables users to make free calls, but only inside North America. FooTalk’s tweak means that Facebook’s UK users can make Facebook-related free calls, but they will need the app.

Also the FooTalk service works across the globe.

The app, which is available for both iOS devices (iOS5 and above), or Android devices (version 2.1 or later) already enables people to make free calls to each other using Wi-Fi in a manner not unlike Skype.

Now though it has incorporated Facebook more deeply into services. So Facebook contacts are listed in a separate tab of the FooTalk address book, which clearly identifies which Facebook friends also have FooTalk and are available for calling.

The uses can make the call if a person has FootTalk and if the person they are calling doesn’t have the service it will offer them an invitation for FooTalk and allow the caller to leave a message on their wall.

“With Facebook now connecting over 680 million mobile users, we want to offer people the chance to take this connection over and above simply sharing status updates and images” commented Graeme Hutchinson, co-founder of FooTalk.

“We believe this is the next step in how we will use social media to communicate and have made this functionality as simple and easy to use as possible, ensuring that even the least technical Facebook users can connect with each other on a call as well as in the usual way.”