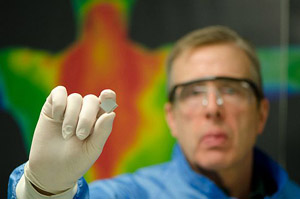 If there was a Matrix prequel we think it’d probably open with a story similar to this, that a company is currently developing a chip to use energy from your skin to power stuff. But fear not, for now it’s just powering little gadgets and fitness tracking devices, no one’s forcing you to get naked and squeeze into a scary water tank and there are no big crazy monster robot things sucking your body dry. Well not yet, anyway.

A startup based in Oregan called Perpetua Power has developed a clever chip, which uses the same kind of technology found in solar panels to turn heat from your body into useful electrical energy.

“We absorb the heat from your body, and that heat is funneled through a thermoelectric generator that converts it into electric power.”

The chip, called TEGwear, is able to absorb the energy straight from your skin, which generates around three volts and is then able to power small devices.

Of course it’s not all doom and gloom and post-apocalyptic worlds controlled by robotic creatures, the technology could be really useful to a range of industries and types of devices, from body-powered smartphone accessories and health-monitoring devices to military applications.

Nothing will hit the market until at least 2014 according to Fast Company, but we imagine the developments of Perpetua Power and of any emerging competitors will be really interesting to follow/get absolutely terrified about.

[Via iO9 Via Fast Company]

One thought on “GOOD: Chip turns your body into a battery, just like in The Matrix”