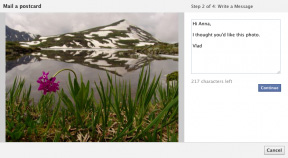 Facebook is currently testing a new service called Mail a Postcard which, as you may suspect, allows users to turn their photos from the social network into actual REAL LIFE postcards, made of card, that you can touch. Mind. Blown.

The service powered by greeting card and gifting company Sincerely, allows you to pick a photo, add a message to the back of it and get it sent out to whoever you like, as well as offering options for you to have photos printed in different sizes too.

According to TechCrunch, the Mail a Postcard idea was created as part of a Hackathon project, but Facebook is trialling the service among users right now to figure out whether a) anyone actually cares about real life objects anymore and b) whether users would be willing to pay for the service.

If the success of the Postagram app is anything to go by then some people do still like mixing the worlds of online and offline when it comes to sending postcards and greetings cards out to friends and family, so maybe the idea of turning a Facebook photo into a real, physical thing that can be sent via snail mail isn’t that absurd after all?

One thought on “FACEBOOK: Will new photo to postcard idea really catch on?”