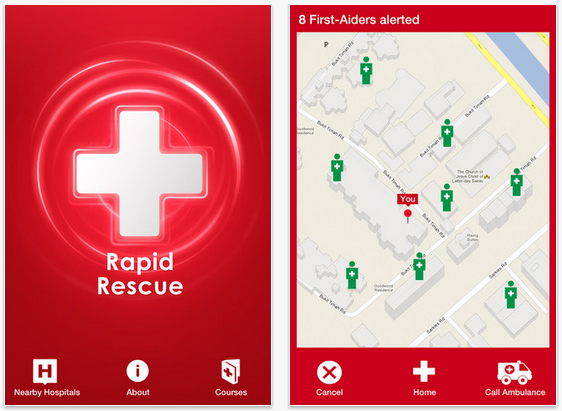 In cheesy films when there’s an emergency and someone shouts “is there a doctor around?” one always appears from the crowd to help, but in the real world it often isn’t that easy to find someone with sound medical knowledge who’d be able to save lives in an emergency.

Well in order to address this problem, a new application called Rapid Rescue is currently being tested in Singapore, which aims to connect those in medical emergencies with trained first aiders who are nearby.

The app has been developed by the Singapore Red Cross Society and enables trained first aiders to set up dedicated push notifications, so if someone close to them needs help they’ll be alerted straight away.

If you’re a smartphone owner and you know you have a medical condition (or just want the app just in case), you can download Rapid Rescue and then use it to make an SOS call if you or someone around you is in an emergency. It’s simple to use, you just need to press the large cross on the homescreen in order to alert nearby first aiders about the problem and where you are.

GPS technology then allows first aiders to see where the emergency is on a map and view the shortest possible route to get there.

It’ll be interesting to see whether a similar concept is rolled out in other areas and whether Rapid Rescue proves to be as successful in the real world as it sounds on paper.