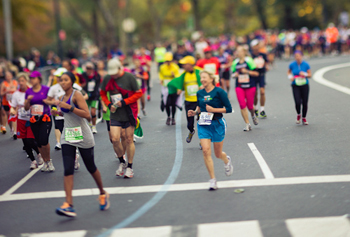 Many fitness fanatics would now shudder at the thought of working out without a smart phone, gadget or at least a watch strapped to their bodies somewhere. After all, if you haven’t tracked your calories, recorded your miles AND made a note of your heart rate did you even workout in the first place?! Well now it looks like our beloved fitness gadgets could soon get a pretty substantial revamp in that they won’t be powered by batteries, but by our own sweaty body heat instead.

According to Mashable, a new kind of technology called TEGwear aims to do away with standard batteries and power sources and instead run off the body heat we’re bound to be producing tonnes of as we jog, sprint and dance our way through our workouts. It works by converting the different temperatures between your hot body and the cool surroundings into useful energy (also known as thermoelectric energy).

A company called Perpetua, known to specialise in alternative energy solutions, is currently working on a chip that can quickly and easily convert our body heat into electrical energy that’ll be able to run small, wearable devices. The technology could produce nearly a milliwatt (one thousandth of a watt) worth of power, which won’t be running a smart phone, but could well provide enough energy for a basic heart rate monitor.

“It can be compared to a coin cell battery […] This technology will last, if not longer, than the electronics it’s powering, up to 10 to 20 years.”

The company predicts that by 2014 we’ll see TEGwear technology powering many small devices as it’s a brilliant use of the body heat energy we all produce as we exercise.