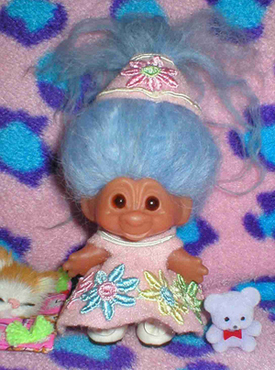 Trolls can be found under gloomy bridges, hitting on girls in London bars and unfortunately all over the internet. Many throw the word around quite casually when communicating online, calling anyone who disagrees with their silly words a “troll”, but if you consult the oracle that is Urban Dictionary, you’ll find that a troll is:

“One who posts a deliberately provocative message to a newsgroup or message board with the intention of causing maximum disruption and argument.”

So a troll isn’t just someone who has an opinion, it’s someone who talks a lot of crap online just to offend, abuse and cause general mayhem.

If you’ve spent a lot of time on the interwebz (of course you have) you’ll be all too familiar with trolls. You may have seen them throw up their crazy words all over forums, say abusive things to bloggers for no apparent reason or maybe you’ve even been on the receiving end of a troll attack, which can be hilarious, confusing, ridiculous but also really REALLY upsetting at the same time.

Last week Facebook handed over the details of a number of users who had been abusing British woman Nicola Brookes. They said mean things, they set up a fake account in her name, they suggested she was a paedophile and generally tried to screw up her life all because she posted a message of encouragement to a past X Factor contestant. Brookes has since taken legal action against Facebook in order to get hold of their details and in what has since become a landmark case here in the UK, the social network agreed straight away.

At first it seemed this was a one-off occurrence, but now according to the BBC, new government legislation will soon be put in place and added to the Defamation Bill that will require all kinds of websites and social networks to cough up the details of anyone who posts defamatory content online.

Although many of us may be breathing a sigh of relief, this is a rather contentious subject that shouldn’t be taken lightly. On the one hand people shouldn’t think they can say abusive things and hide behind their computer screens, but at the same time those in power shouldn’t see this as an excuse to start threatening websites and censoring content under the guise that it’s to “STOP THE TROLLS”. Justice Secretary Ken Clarke reassured the BBC:

“The government wants a libel regime for the internet that makes it possible for people to protect their reputations effectively but also ensures that information online can’t be easily censored by casual threats of litigation against website operators.”

But we’re not convinced.

Of course we don’t imagine this new legislation will put an end to online crazies. After all there are plenty of laws in place in the real world and look how many people still get away with terrible/ridiculous/illegal things on a daily basis. However, if the new legislation puts just a few people off publishing abusive content because they’re scared their details could be revealed AND each incident is taken on a case by case basis, then we’re happy to see it put in place. We think.

One thought on “Could we soon witness the death of the online troll?”