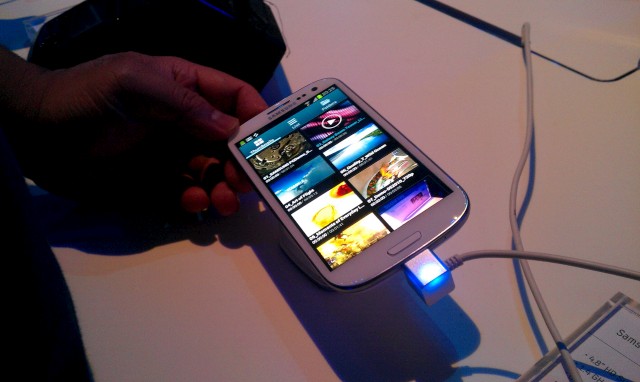 It’s the day after the highly-anticipated launch of the Samsung Galaxy S3 and already we’ve had a hands-on demonstration of the handset, we know what its basic specs are and why it might well be an iPhone killer. The phone has a UK release date of the 30th of May, but now we all just want to know how we can get on grubby little mits on one, so here are the UK networks, plans and tariffs that matter.

Remember: Keep checking back for updates as more providers reveal more plans for the Galaxy S3 in the coming days.

Vodafone revealed it would be exclusively launching the 32GB version of the Samsung Galaxy S3 for the first month from the 30th of May. It’ll be offering the 16GB version too in both white and blue.

Update: There’s been a lot of talk about T-Mobile’s plans and tariffs online, but none of this has been confirmed by the provider itself yet.

T-Mobile only has one plan available at the moment, you can get the handset for £36 a month, but you’ll have to part with £199 upfront for it. You’ll then get 2,000 minutes, unlimited calls to other T-Mobile customers, unlimited texts and unlimited data.

To get the Samsung Galaxy S3 with O2, you’ll need to sign a 24 month contract that’ll cost you £41 a month. For that you’ll have 600 minutes, unlimited texts and 1GB of data per month.

You’ll be able to get the Galaxy S3 for free on The One Plan at £34 a month. If you pre-order the device before the 30th of May you’ll also be entered into a draw to win a Smart TV.