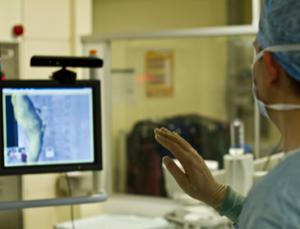 The last place you’d expect to see a Kinect is on an operating table, but the device could be the ideal way for doctors to consult medical images during complicated procedures.

Last week a surgeon at the Guy’s and St Thomas’ hospital in London started using a new system that relies on an Xbox Kinect camera. The surgeon was able to wave his arms, or make other simple gestures, in order to quickly and easily browse through medical images, instead of asking his colleagues to find them for him.

According to New Scientist, surgeons generally need to stop what they’re doing and look through detailed images anywhere from once an hour to every few minutes during a procedure. Many depend on assistants and nurses to hold up images or use a computer to find the information they need, but we can imagine this is a lengthy and rather frustrating process.

“Up until now, I’d been calling out across the room to one of our technical assistants, asking them to manipulate the image, rotate one way, rotate the other, pan up, pan down, zoom in, zoom out […] I had very intuitive control”.

Carrell was able to use the Kinect to look at a 3D model, which was then projected as a 2D live image-feed onto the patient. This way the doctor can see what’s happening inside the patient and look at the 3D model simultaneously.

In order to make the whole process as quick and easy as possible, Carrell and his colleagues have been working with the Microsoft team to develop gestures that they can perform in small spaces during an operation. So, medical professionals can now use simple gestures with one hand at the same time as a voice command to access the information they need.

Related: The Kinect is being used to detect signs of autism in children