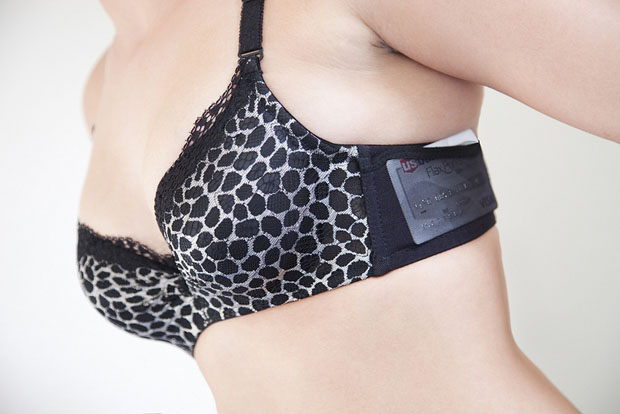 A new project on Kickstarter is looking for funding to create a bra that stores your mobile phone and all your random stuff neatly under your arm. Right now we can’t tell whether this is plain ridiculous or a genius idea…

There are plenty of amazing projects on Kickstarter and plenty that make us question how some people manage to get through life on a daily basis. The JoeyBra sits somewhere in the middle of these two, it’s a bra that has a special pocket to store things, like credit cards, keys and your gadgets. In theory it makes sense. You’re a young, free woman with breasts, why would you carry your stuff around in your bag when you could strap it to your body?

The first thing we have an issue with here is obviously the fact it’d be pretty darn uncomfortable. I’m not the skinniest gal out there, but my iPhone is definitely longer than the little piece of bra at my side, so not only would it be annoying to swing my arms around with glee, but it’d create a pretty unsightly bulge, even if I was wearing something baggy. So let’s not even get started on how deformed you’d look if you had a Samsung Galaxy Note…

This also brings us onto the issue of getting the phone out, would you have to choose between exposing your breasts or your stomach every time you got a text? There are enough sleazy weirdos in the world without us flashing a bit of flesh every ten minutes.

Now moving on to our second issue, the JoeyBra is described as a “sexy yet functional” way for women to carry around their gadgets. We get it. Bras carry breasts. Breasts are sexy to some people. But why should women want to carry their rubbish around in a way that’s ‘sexy’ as apposed to say, oh I don’t know, comfortable? And will there soon be a way for men to carry their gadgets round in a ‘sexy’ way?

We don’t doubt a lot of thought, effort and research has gone into the JoeyBra, and we can certainly see the benefits of having somewhere to store smaller things, like money and credit cards, on a night out. However, the bulges, issues with getting your phone out to actually use it and promise that it’s a ‘sexy’ way to store your bits and pieces makes us feel a little uneasy.

Check out the JoeyBra on Kickstarter.