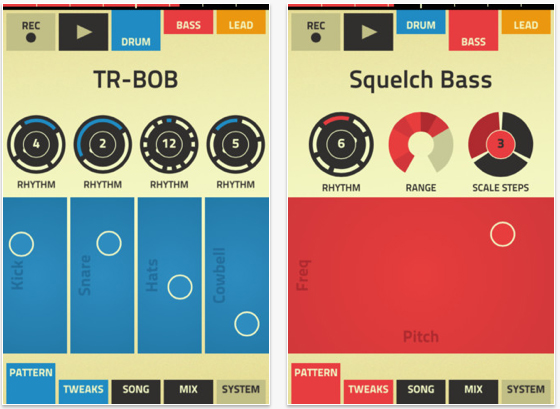 Figure might be our new favourite music making app, as it allows you to create impressive tracks from your mobile with a super intuitive touch interface and good quality sounds powered by Reason.

There are a lot of apps out there for music lovers, but we’ve fallen for new music app Figure in a big way. Brought to us by the team behind Reason, Figure is a very simple application that has even complete beginners making music in a matter of minutes.

However, that doesn’t mean you don’t have plenty of choice, you can play around with drums, bass, leads and synths, then tweak the rhythm, range and scale step with a number of dedicated wheels in real-time or record your tracks too. It’s the app’s touch interface that makes it really stand out, allowing you to slide, spin and swipe through the different controls in a way we’ve never seen before from such a cheap music application.

Figure may be great, but don’t expect miracles, it is an iPhone app that you can buy for under a pound after all and won’t allow you to put HUGE tracks together. However, if you’ve got a few spare minutes and want to play around with a fun app that’s got a rather special interface, then Figure is for you, regardless of whether you’re a beginner or a seasoned producer.

Check out this awesome video of Figure in action.

Available from iTunes for 69p.