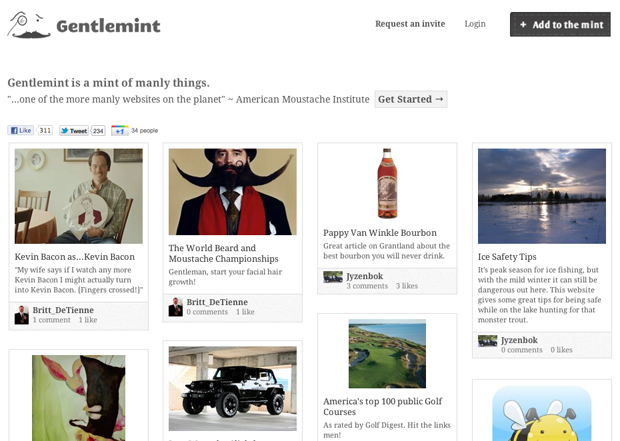 Virtual pinboard community Pinterest has really taken off over the past few weeks. If you haven’t heard of it, been sent an invite or seen 473,589,476 updates about it on Twitter, then it’s a visual inspiration and curation website where you can “pin” content to virtual boards. Yes, there are similar concepts out there, but something about it just makes it really easy-to-use and simple to manage.

As more and more users sign up to Pinterest, many are beginning to question what it’s really for and how the majority of the community are using it. The general consensus is that it’s more popular among women, meaning an abundance of crafty, cute and kitten-related photos. Although we’d argue that it can be used for much more than that, this stereotype means that a new content curation tool has emerged to give men a much more masculine alternative, called Gentlemint. Yes, really.

There isn’t a check on your gender when you sign up (that’d be a huge pain to enforce), but the front page is full of (supposedly) manly things, like cars, fighting and lots of moustaches.

It’s not like anything seen to be overtly ‘girly’ is banned, but the creators want you to share certain kinds of content. One of the site’s co-founder’s Glen Stansberry told Mashable:

“It really has less to do with being a male or female, or kittens or bacon, and more to do with encouraging users to add stuff around that theme.”

We wonder whether encouraging users to behave in a certain way will lead to a dedicated and active community or whether it’ll just make them really frustrated?

But here’s a newsflash, guys can use Pinterest too you know. We checked. It doesn’t have to have a moustache on it to make it manly. We’re not sure whether we’re taking this too seriously and should just see it as a fun site, because in many ways it really is. But many are now saying Pinterest is for girls and Gentlemint is for guys and that seems a bit too much doesn’t it? Doesn’t it?

At the moment the community just exists online at Gentlemint.com, but according to Mashable, iOS and Android apps are on the cards for the future. If you fancy signing up and adding all of your favourite masculine snaps, then you do have to request an invite, but they seem to be arriving in inboxes pretty quickly.