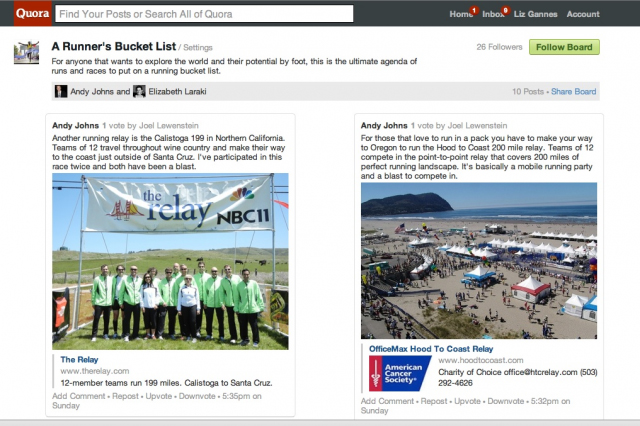 When question and answer community Quora launched to the general public last year, social media geeks were calling it the ‘next big thing’ and now just over a year later a select few are admittedly still dedicated fans, but most of us have forgotten all about it.

Now in an attempt to make it relevant to a wider audience, Quora is becoming much more like a curation tool than a simple question and answer website. Yesterday Quora Boards was launched, which gives users the means to curate posts from Quora and content from round the web and then save it to a board. Sound familiar? Well yep, that’s because one of our favourite sites, Pinterest, uses boards as a way for users to bookmark things too, but from what we can tell Pinterest is much more visual and Quora Boards will allow users to curate all kinds of content.

Just like on Pinterest too, these boards can be public or private and you can have multiple users adding content to each board if you’d like. There’s also room for descriptions and comments under the boards too to spark discussions and further sharing.

Don’t worry if you’re one of the few that loves Quora just how it is, all the regular functionality will still be the same, Quora Boards is just an interesting new add-on. Although, judging from initial responses, dedicated users are worried the new feature could mean the site is full of rubbish content instead of more exclusive, valuable conversations. Only time will tell whether Quora Boards is any good, but it’s risky changing the focus so much, although it may draw more people in, the changes could in turn drive the site’s biggest advocates away.