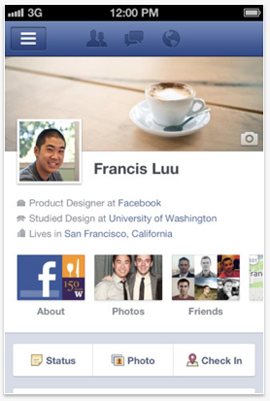 Last week Facebook officially rolled out its new Timeline feature to all of its users, allowing them to opt in, sort through their content and then publish the lovely little stories of their lives once they’re ready for the world to see them.

At the same time, the official Facebook blog announced that the new Timeline features would be coming to Facebook’s mobile site, m.facebook.com as well as Android devices. However, Apple fans have had to wait a few more days, as only tonight has the Facebook app been updated to give iPhone users shiny new Timeline functionality too. Of course you still need to have published your Timeline from the web version of Facebook, but once that’s activated you can now enjoy the slicker, prettier and much more revealing Timeline look on your phone as well.

Although an iPhone update for the Facebook app has been released this evening, there’s no news on when iPad users can see it too, but we imagine it’ll be on its way in the next few days.