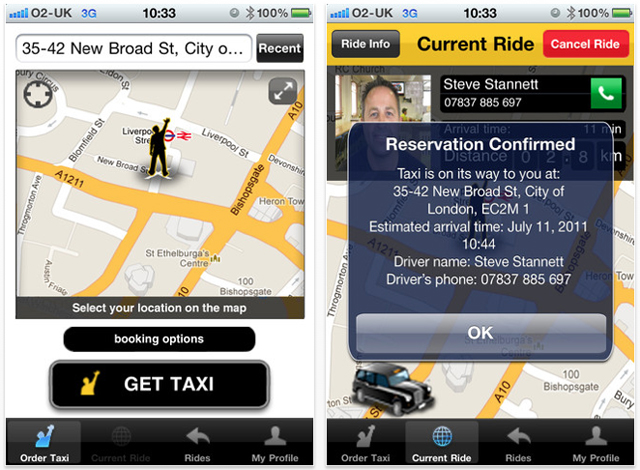 It’s raining, you’re cold, it’s dark and it’s late, you’ve been out with friends in central London and all you want to do is get home. But of course there isn’t a taxi in sight and you don’t fancy standing on the edge of the street frantically hailing every car down in the hope you’ll find one.

There have been a number of apps launched in the past year or so to address some of these issues, we reviewed cab:app back in October and Addison Lee’s offering has always been hugely popular. This week another new mobile application called GetTaxi has been launched, which appears to be the safest and easiest option we’ve come across yet.

We had the chance to speak to the GetTaxi team (in the back of a black cab would you believe) and found out a lot about the new app and why it’s going to revolutionise the way we get around the capital.

GetTaxi allows you to do just that, get a taxi just by pushing a button on your phone. This then hails you a cab, which comes to get you whenever you choose at no extra cost than a normal fare.

The GetTaxi team has been working hard to ensure that the system of electronically hailing a taxi from your phone is as easy-to-use as possible, but it’s also important the app’s interface is clean and fuss-free too. Simply open the app and you’ll see a little map and your location marked by GPS. You can then press “Get Taxi” straight away, click “Booking Options” to fill in your specifications or just make a trip you’ve already taken before by viewing your “Rides”.

Once you’ve hit “Get Taxi”, the app will automatically locate you via GPS and send the closest available black taxis a message to the driver units on their dashboards. The closest cabbie will then use the unit to signify she/he’s coming to get you and not only will you be able to see where the taxi is, but you’ll get an estimated time of arrival too.

Although GetTaxi wants to provide a reliable, quick and easy-to-use service, it’s also very focused on ensuring its users are as safe as possible. Once you’ve ordered a taxi you can see whereabouts it is, what its numberplate is, what it looks like and even what its driver looks like, so there’s no possibility of you mistaking a random car for the one you’ve ordered. We also quizzed the GetTaxi team even further about safety and they told us that all of their drivers must be fully licensed black cabbies and their details are checked and double-checked to give passengers peace of mind that they’re in the right hands.

Another great thing about GetTaxi is it’s hopefully not going to be staying London-centric for too long, with plans for the app and service to branch out into other UK and European countries in the next year or so.

GetTaxi is ideal for those travelling around London who want a reliable, safe and easy-to-use service that they can access from the palm of their hand, especially during Christmas time when people are out much more on a night.

The only negative we’ve found with GetTaxi is it’s still in its early days. Although more than 500 black cab drivers are using the system currently (and more than 2000 will be by 2012 according to the GetTaxi team), the whole of London still isn’t covered just yet, so be sure to check your area is before you’re a bit drunk and a bit sleepy at 2am.

It’ll be interesting to see whether GetTaxi fares well (sorry) in the busy taxi app market, but we think it gets top points for safety, usability and reliability, we just need it to be all over London soon or some people will be put off by its limited coverage.

Available for iPhone, Android and Blackberry devices for free from the GetTaxi website.