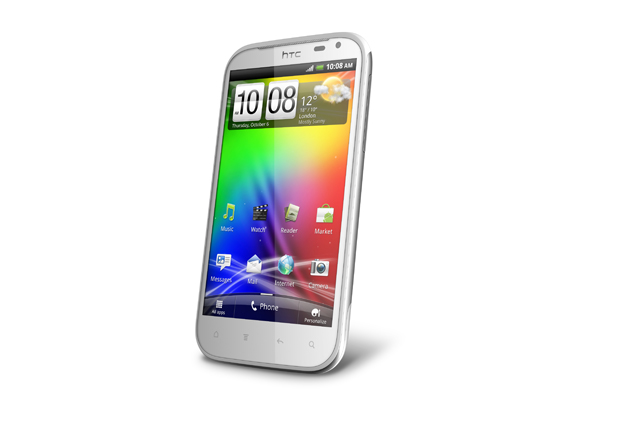 We’re big Apple fan boys and girls here at Shiny Shiny, but the newest Android smart phone from HTC, the Sensation XL, might just be our new BFF. Just.

Here are five reasons we love the new handset:

The handset has an 8MP camera on the back as well as a dual LED flash and a 28mm f2.2 lens, which seemed to worked surprisingly well during our hands-on session (although we were in a very small, dark, secret HTC room).

All of the Instagram fans out there will LOVE the fact that the camera comes with a range of different retro-like filters. Granted there’s not as much choice as you’d find with a dedicated app, but it’s a pretty good selection. There’s also vignetting options and that blurry, fake depth of field look too, so a lot of users can safely dump their favourite apps for all of the built in options instead.

There’s also a camera on the front of the device and that’s 1.3MP.

The 4.7 inch display is pretty impressive. In fact we did wonder whether we were at a tablet briefing and not a smart phone briefing for a few seconds, as our iPhones looked pretty scared by the big new boy.

It’ll take a little getting used to if you’re used to handling a much smaller phone, you may even find some hand and lower arm muscles you never knew you had. But, I have average female-sized chubby hands and I found it pretty easy to navigate around the screen and forgot it was a GIANT after just a few minutes of playing around with it.

The big display obviously means the user experience is much MUCH better, you can watch movies and TV shows without having to squint, and obviously it makes the camera even more impressive and editing much easier. It’ll be interesting to see how some of our favourite apps run on such an over-sized screen too.

During the briefing a member of the HTC team explained to us that this is the first handset which has been built with Beats integration from the ground up, meaning every part of the Sensation XL is dedicated to giving you the best possible audio experience.

Whether you think the Beats integration is cool or not may well depend on your personal music tastes, with fans such as Will.i.am, Justin Bieber and Lady Gaga, for some people it might just be a “so what”.

You’d definitely expect a phone which shouts BEATS, BEATS, BEATS at the top of its lungs to come with some fancy Beats headphones, and you’d be right. Every handset comes with a pair of urBeats included and some limited edition devices will even be paired with a larger Solar set of headphones too. A nice change to the small, annoying Apple ear buds we have far too many pairs of.

The HTC Sensation XL has HTC Watch, a built-in application and service which puts a huge library of movies and TV shows into your pocket. HTC Watch uses progressive download technology, which means that you can watch any kind of video without having to wait for it ALL to load and it allows you to either rent or buy movies.

It seems like a great fit that a handset so geared up to be an entertainment hub would have an app like HTC Watch readily available.

Who should swap their iPhone for the Sensation XL?

We’ve seen a lot of tech press refer to this phone as an “entertainment hub” for “entertainment lovers”, but that’s hardly very specific! We’d hate to meet the other half of the population who don’t like entertainment at all. Instead we think it’s ideal for someone who uses their phone for entertainment a LOT of the time. And we’re not just talking half an hour of Spotify here and there, if you depend on your handset for catching up on TV shows, watching videos and listening to lots of music, then this is one for you. Just have a play around with it in the store first, it IS pretty big.

There are no exact details about dates and prices just yet, but we can expect it to be widely available from early November.