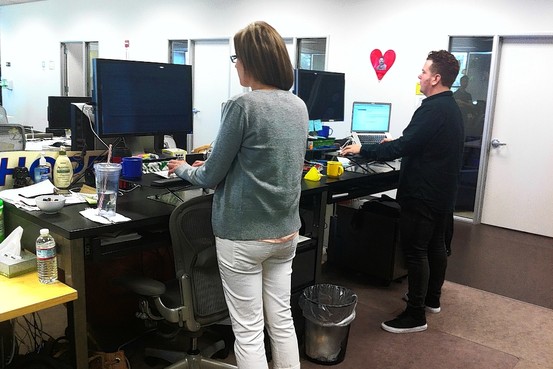 The latest trend over on the other side of the pond is to stop sitting at your desk to work and instead stand awkwardly next to it, according to the The Wall Street Journal.

Big tech giants like Google and Facebook already have hundreds of employees ditching their big, comfy, ergonomic office chairs in favour of plain old standing. But then again, if Mark Zuckerberg’s doing it then it must be cool, right? I mean have you SEEN that guy’s hair?

Many office workers who choose standing over sitting are apparently finding that they’re much more energised and motivated to work than they were before. I can see how this would make sense, if you’re standing up and concentrating on your posture, then you’re probably not as likely to feel that mid-afternoon-biscuit-craving-procrastination-slump quite so intensely.

Spending less time in a chair could also have numerous health benefits, with the American Cancer Society finding that women who end up sitting for more than six hours a day are 37% more likely to die prematurely than those who sat for less than three hours and the same stat for men is even 18% higher. However, I imagine these results could be a little skewed as the time not spent sitting down should probably be spent exercising and moving about rather than just doing the same mundane tasks while you’re on your feet.

Have a quick Google around and you’ll find that there are a LOT of standing advocates and many of their blog posts interestingly read as if they’ve had some kind of spiritual awakening.

Do you think you could be an active, healthy stander or do you prefer to be a slumpy, comfy sitter?