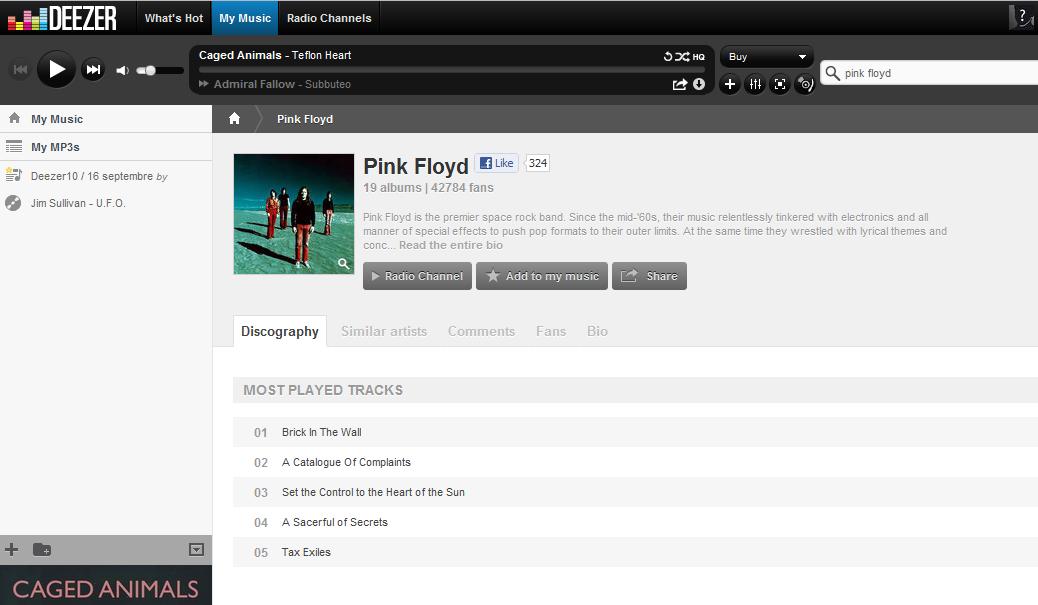 So what the hell is Deezer? And do you need another music streaming service in your life? Well, chances are you hadn’t heard of Deezer before last night when the French company announced its role as part of Facebook’s music package. Deezer however has been around for a while. It was launched as a service back in 2007 in France (before Spotify) and since then has signed up more than 20 million users and 1.3 million subscribers. It actually debuted in the UK earlier in September, but will have got a massive new number of subscribers yesterday.

But what if you have Spotify already – do you need another music streaming service? Well here are the differences between the two.

1 Deezer is web-based. Spotify is client based.

The big difference is that Deezer is a web based service. So you don’t have to download any software, you simply go to the website, create your account and the music – all 13 million tracks – is waiting for you.

With Spotify you have to have a computer with the client on board for it to work. The Facebook upgrade, which lets you listen to Spotify songs on the social networking sites, doesn’t actually change this. If you try to listen to a song it then downloads the client on to the PC. Very cleverly it doesn’t matter who has been using the Spotify client as it automatically logs you out of someone else’s account and connects to yours.

I guess the browser based nature of the service might mean that Deezer can go a few places that Spotify can’t as it might be able to skip through some work firewalls.

2 The free options are different

As you probably know the free Spotify service is one, ad funded and, two comes with a few restrictions on the number of times you can play a track. With Deezer things are a little different. You can access the radio channels and Smartradio, but music on demand is limited to 30 second clips rather than the whole song. To listen to whole albums etc you have to subscribe. However when we signed in this morning we were offered a few weeks of the service for free. I am not sure how long this will be available for.

3 The mobile service is different

Deezer wins on this one. Its mobile options are easier to use and more detailed than Spotify’s and includes extra features such as radio and Smartradio. You can also listen to music on your mobile via Deezer (well the radio and Smartradio) without having to pay for a subscription, Spotify only offers its mobile service to its paying customers.

Other than those three biggies the services are fairly similar.

Spotify has the edge in number of track 15 million to 13 million, however I did keep finding things on Deezer that are not on Spotify. The big names are John Lennon (his catalogue was removed from Spotify a few months back) and Pink Floyd (whose albums are being rolled out on Deezer in the next few weeks). Neither service has The Beatles or Led Zeppelin.

The interfaces and general features (like social sharing of tracks) work in a similar way. Deezer looks a little more MySpacey to Spotify’s iTunes influenced design. Deezer does have Soundcloud integration, which is a very nice touch. I guess Spotify will get this soon.

The subscription deals are virtually identical with both charging £4.99 for full PC service and £9.99 if you want to take tracks with you on your mobile. Slight moan about Deezer though – their service is 4.99 and 9.99 Euros which makes it even cheaper in France. Shame they couldn’t have saved us Brits a few pence too.

Overall then, do you need both? Well probably not. Is one better than the other? Not really, it is too close to call. There might come a day when one of them offers a feature that will make me change my mind, but for now both services are well worth considering. Five quid a month for all that music? Bargain!