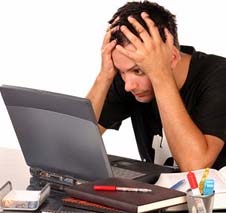 Ah! so that’s the reason all those people are crazy. It’s because of Facebook. Because Facebook makes you psychotic of course.

It’s why you should stop looking at pictures of your ex-boyfriend’s new girlfriend’s Cesar Salad NOW. And don’t even think about updating your status.

Like the recent “The Internet Causes Autism” scare – these sort of stories tend to focus on the extreme cases. beyond the headline though the study does throw some trends into the light. And mentions some positive effects of social-networking too.

Here are the facts behind the finding:

Dr. Larry Rosen, a professor of psychology at California State University, distributed surveys to 1,000 urban adolescents and his own 15-minute observations of 300 teenagers that were studying.

He found:
>Teenagers who use Facebook more often show narcissistic tendencies while young adults who have a strong Facebook presence show more signs of other psychological disorders, including antisocial behaviors, mania, and aggressive tendencies.

> Daily overuse of media and technology has a negative effect on the health of all children, preteens, and teenagers by making them more prone to anxiety, depression, and other psychological disorders, as well as by making them more susceptible to future health problems.

> Facebook can be distracting and can negatively impact learning. Studies found that middle school, high school, and college students who checked Facebook at least once during a 15-minute study period achieved lower grades.

> Online social networking can help introverted adolescents learn how to socialize behind the safety of various screens, ranging from a two-inch smartphone to a 17-inch laptop.

One thing I will say though – it’s hard to work out the cause and effect in this. Kids with poor attention spans might well distract themselves with something else if Facebook wasn’t there.