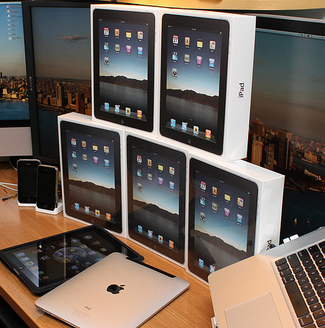 Gone are the days of iPads being solely reserved for that pretentious guy in the corner of the coffee shop.

Recently they’ve started to pop up in more and more unusual places, they’re in our schools, on our buses and in our offices, which is actually no surprise given how compact, slick and intuitive the shiny little guys are.

Supermarkets
Where?
According to reports on The Next Web this morning, Sainsbury’s is currently looking at equipping trollies with iPad stands and speakers.
Why?
Well we’re not entirely sure why, but the initiative is being introduced by Sky to help promote a new service, so we’re presuming people are going to be encouraged to watch TV whilst they shop. It’s a nice idea but I’m not entirely sure how it’d really work in practice… I imagine there’d be a lot of horrendous trolley crashes and shopping mistakes.

Airlines
Where?
Earlier in the month T3 wrote about BA’s plans to replace paper documentation with iPad devices on its flights.
Why?
Storing all kinds of flight information, such as seating plans and special requests would undoubtedly make the job of air hosts and hostesses much much easier giving them more time to concentrate on paying attention to passengers.

Bin lorries
Where?
Bury council has allegedly begun rolling out iPad devices to a number of refuse lorries in order to keep track of which houses aren’t recycling or leaving their bins out on a regular basis.
Why?
Well, those who came up with the idea are claiming it’ll be much easier in the long run and could stop documents going missing or getting wet and damaged. Although they’re all fair points, it does seem like a waste of money for what looks like a fairly simple tracking system.

Museums and Galleries
Where?
The Powerhouse Museum in Sydney started integrating iPads into some of its displays last year and many more museums are starting to follow suit.
Why?
There are already plenty of iPad apps built for use in all kinds of galleries and museums, so it’s no surprise they’d actually be introduced into some establishments. They present visitors with a really interactive way of learning about certain exhibitions and give them much more freedom than a static display or a tour with hundreds of other visitors.

Operating Tables
Where?
A doctor at Boston’s Beth Israel Deaconess Medical Centre told CNBC earlier in the year that he depends on his iPad on the emergency ward as much as his stethoscope.
Why?
It’s apparently a way for doctors and nurses to keep track of records as well as find information about conditions and medicine that they wouldn’t know off the top of their heads. Hmm. Comforting.