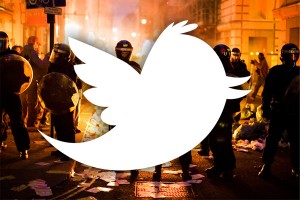 So as of 10pm last night Colonel Gaddafi had been shot by his own people. As well as being arrested by foreign forces, holed up in a hotel in the north of Tripoli and having absconded and left the country. When it comes to the truth you take your pick. All of the above were rumours on Twitter and all from reasonably creditable sources. All were heavily retweeted too.

No I admit I don’t know where Gaddafi is, but I am sure starting to have issues with Twitter. Not the technology, just like Blackberry Messenger and the riots you really can’t blame the medium for being chosen by those who choose to break the law, rather the people who use Twitter.

I can’t imagine why people would wish to tweet news they know isn’t true. Maybe in Gadfaffi’s case presenting him as dead bought him a few hours to be whisked out of Tripoli. As for the rioters, saying things are kicking off in Kilburn might mean that there are few less police out in Dalston. However I think that most of the people are tweeting wrong information aren’t that sinister. They are just misguided fools having fun at our expense.

As for retweeting information that hasn’t been verified, I guess most people on Twitter (myself included) have done this. However after the riots, like a lot of other Twitter users, I am lot more wary of doing it.

Also those who plea for others not to retweet rumours need to be clear as to what ‘rumours’ are. What ‘verifies’ a story? When the BBC runs it? News organisations have got things wrong before. Some, ironically take a lead from Twitter…

I guess Twitter really is just a reflection of its users and if there are people who get off on making up news and retweeting hearsay then there’s little the technology can do to stop it.

Over the past few months what once was a very real breaker of news has shifted to become much more of a field for rumour, unsubstantiated facts and more all presented as gospel truth. In many ways it undermines the credibility of Twitter as a news source and makes me feel less inclined to go there for updates. It is saying something but these days Sky News seems to be a better bet.