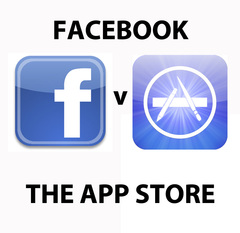 Facebook has created a platform that could circumvent the Apple app store and turn Apple’s own devices against them.

Called Spartan, it is an html5 mobile version of the site that would run through Apple’s Safari browser on devices like the iPad and iPhone, rather than being a true app. It explains why Facebook have held back from making an iPad app and also gives us a little glimpse of the future where the big tech giants – Apple, Facebook, Google clash over all areas of technology.

The new html5 mobile site would also act as a platform for apps of its own – like the new photo-sharing application Facebook has in the works.

Spartan would wrest control of apps from Apple’s hands and allow Facebook to do things that Apple’s tightly controlled app store won’t allow.

Sounds revolutionary? It would be. And if Facebook starts doing this then we can only imagine that other content-makers will start to try it too.
Too early to say the impact yet, but it might wrest the smart developers away from apps and back into html. Apps have certainly been the success story of the past five years, but this could be the beginning of a shift away from them.